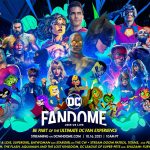 You are reading
DC FanDome 2021 Round Up

As part of this year’s all-digital events, DC Comics and Waner Bros. have moved their major news conferences to the DC FanDome again for 2021. A live streaming event that showcases what is next in the world of DC. Overall, it was a decent showing of what’s coming next in the DC universe across different entertainment platforms. Here are the biggest announcements from the event.

During DC FanDome 2021, fans got an update about the upcoming Suicide Squad: Kill The Justice League. You might recall the new game from developer Rocksteady was announced last year. An action-adventure shooter from the creators of Batman: Arkham Asylum and Batman: Arkham Knight.

Suicide Squad: Kill The Justice League takes place in the Arkham universe. You play as four different characters Harley Quinn, Deadshot, Captain Boomerang, and King Shark. Players can switch between any of the four at any time, or play four-player co-op. Of course, as the title says you will be taking the Justice League head-on.

Suicide Squad: Kill The Justice League will be out in 2022 on PC and current-gen consoles.

The DC live stream showed fans another trailer of the upcoming Gotham Knights. Again, you might recall Gotham Knights a new game from WB Montreal was announced last year. An action role-playing game from the creators of Batman: Arkham Origins. Not to be confused with Rocksteady the developers behind the original Arkham games.

Gotham Knights takes place in a universe where Bruce Wayne is dead. You play as four different characters Nightwing, Batgirl, Robin, and Red Hood. The game is centered around the 2011 Court of Owls storyline. Along with an optional two-player co-op campaign.

DC FanDome 2021 Shows Off A Glimpse of The Flash

While fans did not get a full trailer of the upcoming The Flash movie. Instead, we were treated with a teaser. The movie looks very interesting and will release sometime in 2022. Check out the teaser above.

Last, but certainly not least, we finally got a trailer for the upcoming film The Batman. The beloved character looks to be in good hands with Robert Pattison depicting the caped crusader. The Batman will hit theaters next year on March 4, 2022.

What are your favorite moments from DC FanDome 2021? Let us know in the comment section below.