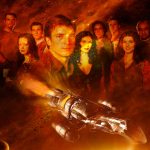 You are reading
Firefly Reboot Series Possibly Coming To Disney+

Way back in 2002 a little show called Firefly premiered on the FOX network. On the surface, it seemed that Firefly was yet another show set in the future with a crew that flew around on a spaceship. While that description is true in a sense, Firefly differed from similar shows in several important ways.

There were no aliens on this series. Serenity – the cargo ship our heroes used to travel from planet to planet – had no weapons. So we never dogfights set in outer space during the entire series. What we got instead was a show focused heavily on character development. The characters were relatable, memorable and were actually written in a believable manner. Sadly, Firefly did not last long. We never got a complete season before FOX executives pulled the plug on the adventures of Captain Malcolm Reynolds and his crew.

Even with such a short run, Firefly boasts a remarkably loyal fan following who yearn for more stories about their favorite crew of smugglers. A movie based on the show was released in 2005. Despite a mediocre performance at the box office, fans continued to demand more Firefly content. It looks like their wishes may finally be granted.

See More: Alien is coming to FX and Hulu

Remember about a year and a half ago when FOX was acquired by Disney? That acquisition means that a number of intellectual properties owned by FOX are now in the hands of the House of Mouse. Well known franchises like Die Hard, Aliens and The Simpsons now owe their futures to the whims of Disney. In turn, Disney needs to produce epic amounts of content to sustain its video subscription platform, Disney+. Most of this new content will come from television series given the fact that the future of movie theaters is questionable at best.

This is where Firefly comes in. Liana Keane over at GFR says a source has leaked that an all new Firefly show is in development for Disney+. Fans of the original show should temper their enthusiasm a bit, however. For one, the new series is said to be very early in the development process. It would be quite a while before we can actually watch the show, even if the rumor is true.

Another Warning To Longtime Firefly Fans

Secondly, the new show may have more of a squeaky-clean tone compared to the original vision of series creator Joss Whedon. As Keane noted, think of a show closer to a PG rating this time around. My first thought was what might happen to Inara, a rather philosophical sex worker who traveled with our heroes.

Speaking of Joss Whedon, it is also questionable whether he will be involved with the reboot. Whedon has become inextricably linked to several controversies as of late. Disney may not want to be connected with all of that.

All we have for now is a rumor from an anonymous source. But if a new Firefly show is indeed headed our way, rest assured we will let you know all about it here on LordsofGaming.net.