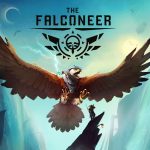 You are reading
The Falconeer Review

Falcons are an important part of my culture and heritage. They represent the finesse and grace that is often associated with the sport falconry. The Falconeer has these majestic creatures front and center, albeit enlarged dramatically. Although the game’s presentation matches the grace of a falcon, below the surface it lacks substance.

The Falconeer has an almost retro feel to it. It is an air-combat game in a similar vein to Panzer Dragoon or Crimson Skies. This genre was popular back in the early 2000s, but has not enjoyed the kind of revival that, say 3D platformers have recently. The basic gameplay loop has you flying around on a giant falcon shooting away at enemies in the sky, sea, or ground. However, The Falconeer does enough to distinguish itself from its air-combat inspirations.

Games like Panzer Dragoon and Crimson Skies were arcade shooters at heart. They focused primarily on dogfighting and action first and foremost. Whereas, The Falconeer invested heavily in its environment, ambiance, and overall vibe which pays off in a meaningful way. The game is absurdly atmospheric for an air-combat title. It is also an open-world game, so you are free to fly around the world as you see fit. And you will see fit, seeing as how flying feels great. 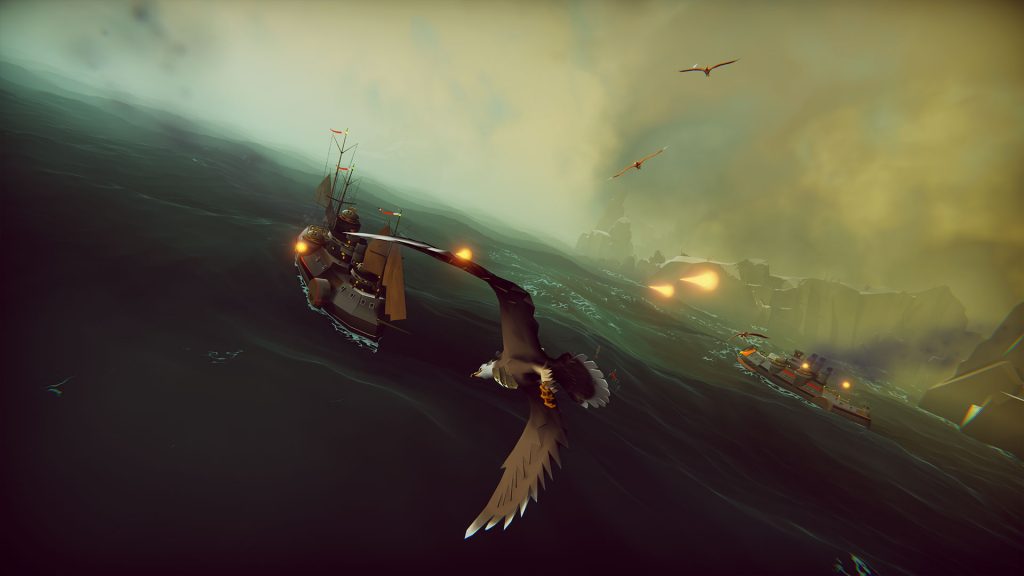 The flying mechanics in The Falconeer are solid. Playing with a controller, the game’s responsiveness was impressive given that the game was developed by (mostly) a single developer, Tomas Sala. It was easy to turn, dive, and barrel roll. The Falconeer’s performance overall was great. I hardly experienced any bugs or glitches which made the experience very smooth, especially with 100+ frames per second. Playing the PC version of the game opened up higher frame rates and if you are playing on Xbox Series X/S be sure to select the high frame mode, as it really lends itself well for The Falconeer’s flying and aerial combat mechanics.

Combat, while fun, gets repetitive quickly. You can lock on to your target and just pull RT to fire away. If, for example, you are targeting a ship, you can press A to target different parts of the ship. However, the lack of any alternative fire really impedes dogfighting. It just becomes a dull blast stream that lacks any characteristics. Missiles, or something similar, would have worked well to create more dynamism in combat.

See More: Backlogs are Hard to Work Through

I also would have appreciated a more detailed tutorial. Instead, players are quickly taught the basic control and thrown into the open-sea world. It was confusing, and I had to figure out other key mechanics myself. Important features such as how to replenish your dash and leveling up your gear, among others. In this sense, The Falconeer did not give a good first impression.

Once I figured the game’s gear upgrading system, things got a little bit better. Yes, combat was still quite monotonous and repetitive. Yet, after upgrading your main weapon and stats, things began clicking. It really is a shame that the game did not explain how to level up your falcon and gear. Because early on there is a dramatic difficulty spike that was frustrating. Only after upgrading, was I able to progress and the game finally began to click for me. Another thing that did not give off a good first impression was its story.

The story is yet another head-scratcher. The game is broken up across several chapters. For some reason, you can jump right into the second and third chapters from the get-go. But again, that pesky difficulty spike will likely deter you from doing so. You can select a different character and factions in each chapter. This opens up different perspectives and explains each faction’s culture. Completing more story missions also expands the rivalries with other factions, but this feels very unfulfilling. In other words, you do not get emotionally invested in these rivalries playing out. Additionally, the game’s story is explained very slowly. You do not get a good grasp of the story by the end of the first chapter. This further detracts from the game’s narrative since very little is explained in the beginning and this lack of a strong hook lingers. 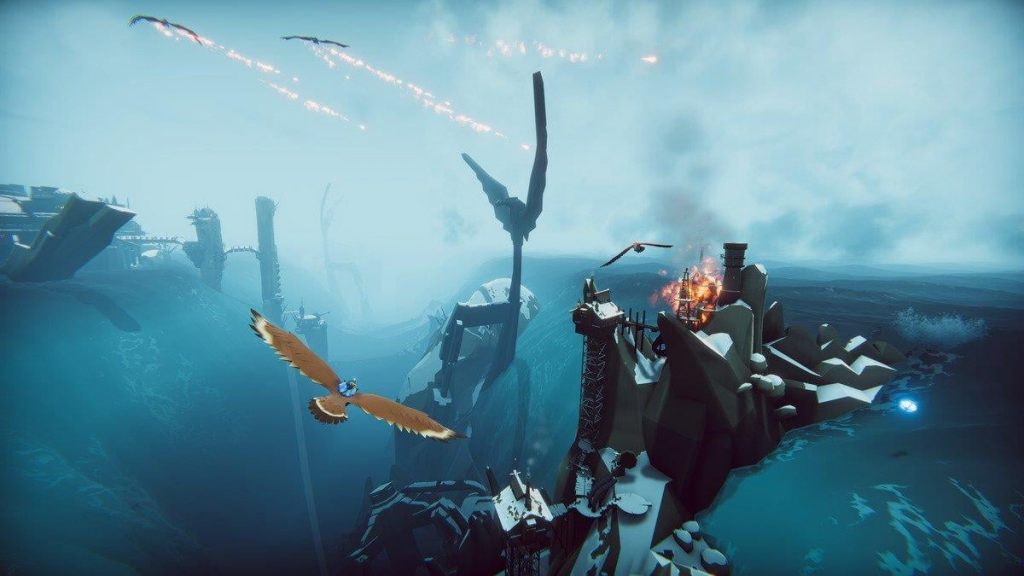 Graphically, the game is beautifully realized. The cel-shaded graphics really complement the game’s overall visual aesthetics. The crashing waves and environments are wonderfully crafted to showcase Tomas Sala’s imagination. Half the time, I enjoyed panning around my vicinity because the game’s mysterious ambiance is so well realized.

While the game’s scenery is engrossing, it is also a bit empty. The ruins, towns, and sprawling monuments that litter the world of Ursee create a wonderful sense of mystery. Especially the scar-like trench that cuts the Ursee known as The Maw. However, by virtue of it taking place over open water, it means that often times the world feels vacuousand dull. You yearn for more of the beautiful world, but there just is not enough interesting to make the world feel full. 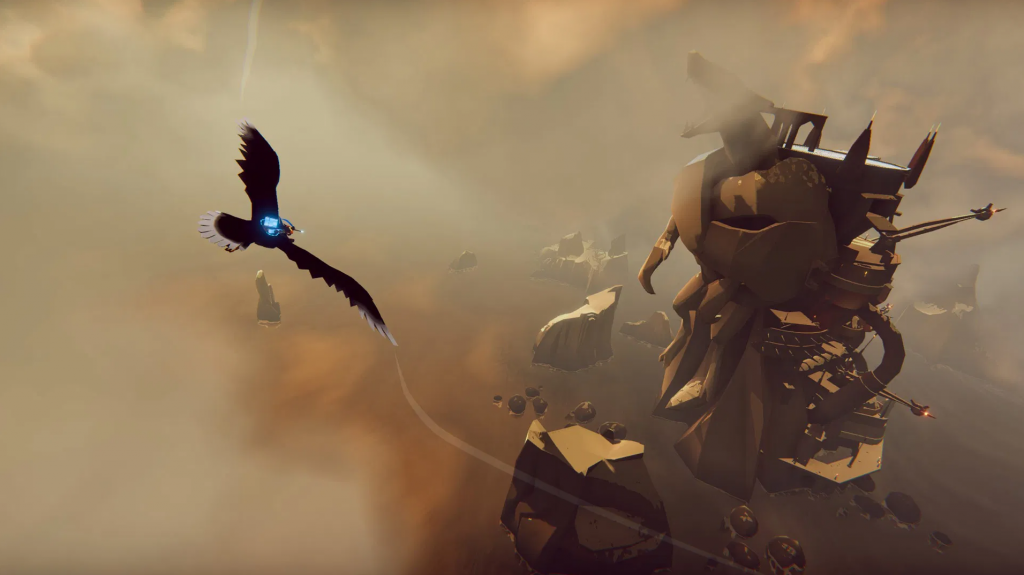 Mission types in The Falconeer are quite limited. You have your typical escort and fetch missions. The game tries to iterate on those foundational mission types, but in the end, they all feel the same. The lack of in-game checkpoints means that dying has you restarting from the beginning. It is an inconvenience that could have been easily remedied. And you will have to do a lot of side missions to save up for upgrades. Otherwise, the game’s inconsistent difficulty will not let up.

Final Thoughts on The Falconeer

The Falconeer has a beautiful art direction that is supplemented by a mysterious open world. It is impressive that a single developer created this game. Controls are tight and responsive and combat is easy to learn but surviving dogfights is another ordeal entirely. However, repetitive mission design, inconsistent difficult spikes, and an unfulfilling narrative detract from the experience.

The Falconeer is available now on Steam and Xbox.