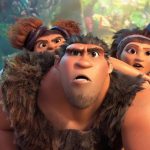 You are reading
Croods Stomps out any Competition This Weekend

This past holiday weekend The Croods: A New Age was released in theaters. The movie was able to make an impressive amount of money. Some of the other movies weren’t that lucky.

Family cam out in droves to the theaters this weekend. Even in a time when most people have been told to stay home. They gave The Croods: A New Age a great opening weekend during the pandemic. The movie was able to gross an estimated $9.7 million domestically. In the foreign market, the movie was able to gross $20.7 million, bringing the worldwide total to $37.8 million. With a budget of $65 million, it shouldn’t take long to recoup that amount. This is going to be one of the few movies in 2020 that makes actually makes money in the theaters.

Freaky came in at second place with $770,000. Right now the movie is sitting at $11.8 million worldwide. National Lampoon’s Christmas Vacation was one of the two new rereleases at the box office this weekend. It grossed $170,00 as it played in a little over 300 theaters. Frozen has obviously been overplayed, it only grossed $120,000. Fans can easily watch the movie on Disney+ from any device they own. Elf and The Santa Clause made some money this past weekend. Both films just keep making money for their studios years after their original release.

Expect The Croods: A New Age to stay on top of the box office for the next few weeks. Nothing is scheduled to be released that can compete with it until December 25th. Both Monster Hunter and Wonder Woman 1984 will be released that day. The comedy Half Brothers will be coming out on December 4th, it won’t be able to contend with an animated movie. It also seems that Godzilla vs Kong will be coming to a streaming service in the near future. After Wonder Woman 1984‘s move to HBO Max on day one, expect more movies to fall in step.

What movie do you want to see released soon that was delayed? My pick has to be Ghostbusters: Afterlife. Let us know in the comment section below.