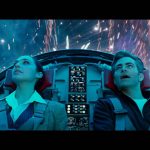 Wonder Woman 1984 was able to take over the top spot for a second weekend. Even with all the negative reviews the movie easily stopped The Croods from taking over the top spot. It seems like both of these movies will be on top for a little longer.

Wonder Woman 1984 grossed an estimated $5.5 million this past weekend. The movie now sits at $118.5 million worldwide. This really wasn’t what Warner Bros Studios expected when it made this movie. Given the current circumstances, this is the best it will be since it does have to compete with an HBO Max release. This is what Legendary and other studios are worried about with their movies opening up on HBO Max the same day as theaters. Possibly by the time some of the bigger movies open, more theaters will then be allowed to reopen.

News of the World dropped down to third place as The Croods: A New Age was able to take the second spot back. Monster Hunter was also in the mix this weekend. That movie really didn’t do well during its time in theaters. Maybe a digital release can help it. One of my favorite franchises also has a rerelease this weekend. Alien was released in 505 theaters as it grossed $75,000.

At this point, only two movies are listed for a wide release in theaters. The Marksmen and The Little Things are the only two listed so far. It looks like most of the movies are still set to be released later this year. I really can’t wait to see Coming 2 America when it’s released on March 5th on Amazon Prime. This movie was originally supposed to be released on December 18th, 2020.