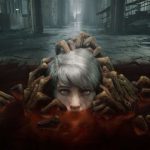 You are reading
The Medium Review – Psychological Horror for 2021

Horror games typically do one of several things to a gamer. They may utilize jump scares as Resident Evil infamously would do with windows having dogs lunge through them. They may employ psychological and acute audio tactics like Hellblade: Senua’s Sacrifice. Sometimes they may put you in terrifying scenery as Silent Hill does when you hear the sirens of its hell beginning to ring. Bloober Team is no stranger to creating horror games and knows these tropes well. In 2019, they released Blair Witch, and while it did well in many aspects, it released to not so friendly reviews. In 2020, the developer [re]announced The Medium, a game they had originally began working on in 2012. The game aims to bring the best in dark psychological horror without the oftentimes clunky combat mechanics of many of its forebears. 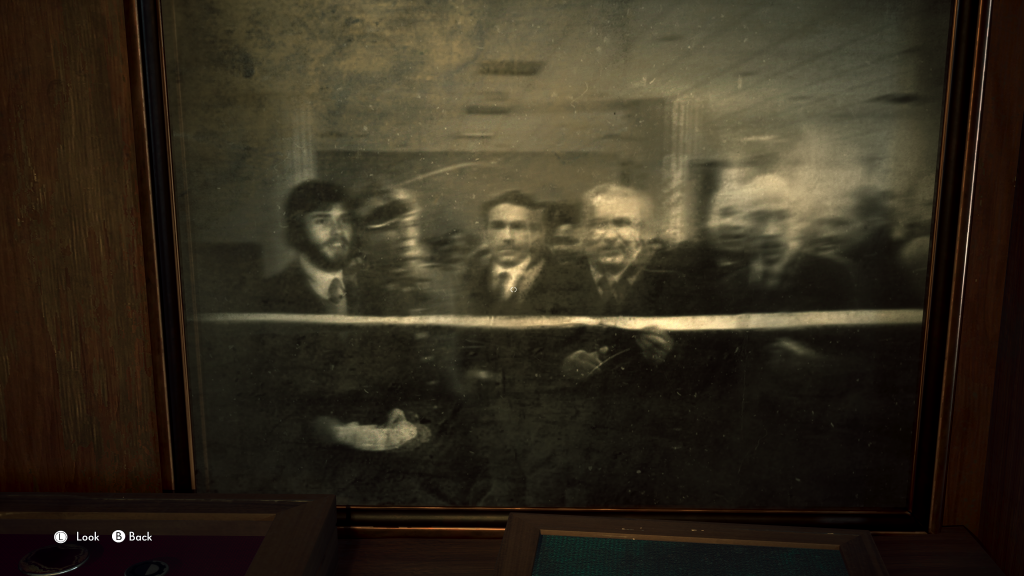 The Medium is designed as a third-person perspective game that has you explore the abandoned USSR “resort”, Niwa, looking for clues to further your journey of self-discovery. This also marks the first real next-generation game exclusive to the Xbox Series X & Series S, absent from the Xbox One generation. Bloober Team has aimed for a 4K, 30 frames per second performance. In my experience with the Xbox Series X, the game ran perfectly smooth despite the frames being lower than the often expected 60 frames per second or higher., However, cutscenes I felt would have benefited from a boost in frames per second. For PC players, the game will have an option to unlock frame rates, which could potentially make those cutscenes visually operate at what feels next-gen.

The Medium opens in Marianne’s apartment, which is a real life location and an Easter egg homage to Bloober Team’s previous game Observer: System Redux. This turns out to be one of many Easter eggs that the developer has hidden in The Medium with odes to its previous titles as well as Polish heritage. It is this Polish heritage that really comes through in The Medium’s primary location of Krakow, Poland at the aforementioned resort. Niwa was essentially a vacationing spot for the residents of the then USSR occupied state of Poland.  It has been long abandoned and is located in a dense wilderness that you occasionally will be exploring as well. Long gone are the days of the USSR and so the decay of time has set in.

The story follows a medium named Marianne who is dealing with the loss of her foster caretaker, Jack. She knows of her abilities, as did Jack, who ironically operated a funeral home. She receives a curious phone call from someone named Thomas who states he knows what she is and can help answer any questions she may have about her abilities. This curious phone call, immediately after the loss of someone so close to her, launches the story forward with a good balance of mystery and character focus. The story itself I found to be one of the most intriguing that I have played in years. As the story progresses you begin to learn about the history of the explored spaces and the individuals whose history has been stained by the tragic events at Niwa. You begin to start to question the motives of the people around you, which in the end find clever ways to loop back around and answer many of the Marianne asks along the way.

Niwa has been abandoned, and you can clearly see the decay that has been setting in for quite some time. Brush and plant life has started to make their way into the concrete structures. Leftover buildings and objects from employees and tenants can be found and often times give clues as to what life was like staying at Niwa. As you explore, you start to discover that they held some very dark secrets and may not have been as pleasant as the posters and brochures want you to think. Its dark history has left a stain of hate, agony, and fear in its wake.

One of the biggest selling points for The Medium, was the use of dual reality. At certain points, Marianne becomes overwhelmed with her abilities and splits into two worlds, the real-world and the spirit-world. These points are scripted and not something that the player can do on command. During these splits, the player will have to pay attention to what is going on in both worlds, as one impacts the other. You must progress both sides, which operate identically and simultaneously if you want to complete each segment. Additionally, the player may need to have an “out of body experience” and use the spirit-world version of Marianne to influence the real world in ways that would otherwise be impossible. I found this to be clever and unique in how it is handled. The spirit-world will also be occasionally navigated without the dual reality, so players will have plenty of time to explore both worlds.

The darker color palette keeps the creep factor present at nearly every moment. While you are in the spirit-world, the color tones give a hellish vibe on top of the grotesque features of the background and landscape. Ghostly remains make up the walls; limbs hold staircases upwards for you to climb, and skin walls block pathways for you to discover. Bloober Team drew inspiration from Zdzisław Beksiński, a Polish painter known for his dystopian and gothic works of art. This inspiration translates extremely well into the game world and gives everything a stunning and unique look.

Movement in The Medium can feel stiff at times, though it is not as rough as older, similar style movement of other games. Cut scenes feel awkward when characters speak as compared to many modern games that utilize motion capture. I am not sure if this is from the actors possibly speaking Polish instead of English, but sometimes it felt like just enough movement to let us know they were the ones speaking despite the words differing from real-world lip movements. Though this is a small blemish on otherwise outstanding audio design.

From the moment the melody starts in the opening prologue, the score sets the tone. The musical composition is co-scored by Akira Yamaoka, who worked on the Silent Hill franchise, as well as Arkadiusz Reikowski, who’s worked on nearly all of Bloober Team’s works. The music is wonderfully placed giving a sense of tone at any given moment. Each deep bass stroke instills an unsettling fear as you are chased by The Maw, the game’s sinister antagonist.  When you are learning and discovering clues, the ominous melody helps set the tone of a mystery being unlocked. Often times, I felt as if I were watching a television show in the vein of Stranger Things with how well placed the compositions are.  The score of The Medium sets the bar remarkably high to start off 2021, and I firmly believe it will be a nominee for musical categories at year-end awards.

Reaching in the spirit-world. 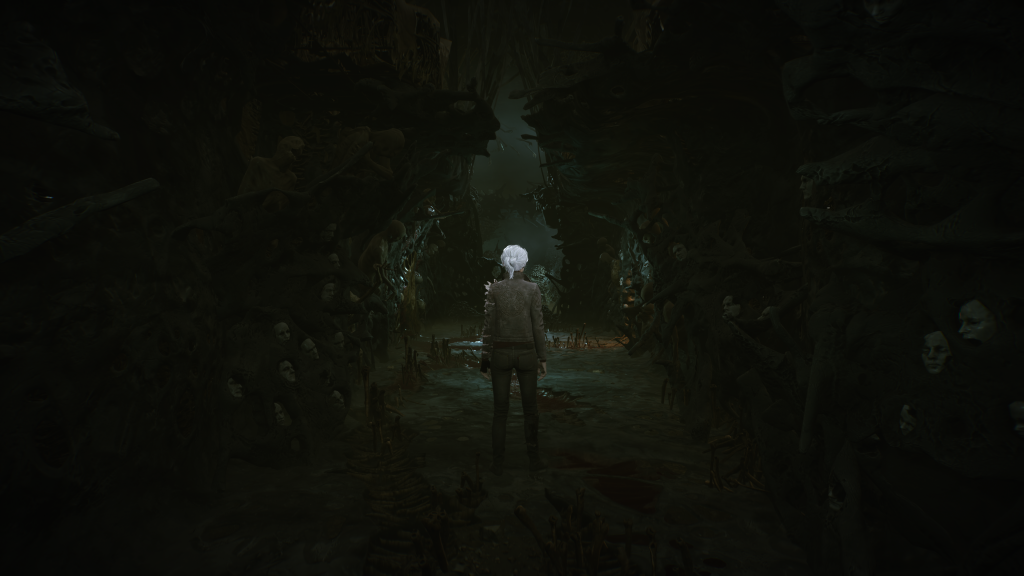 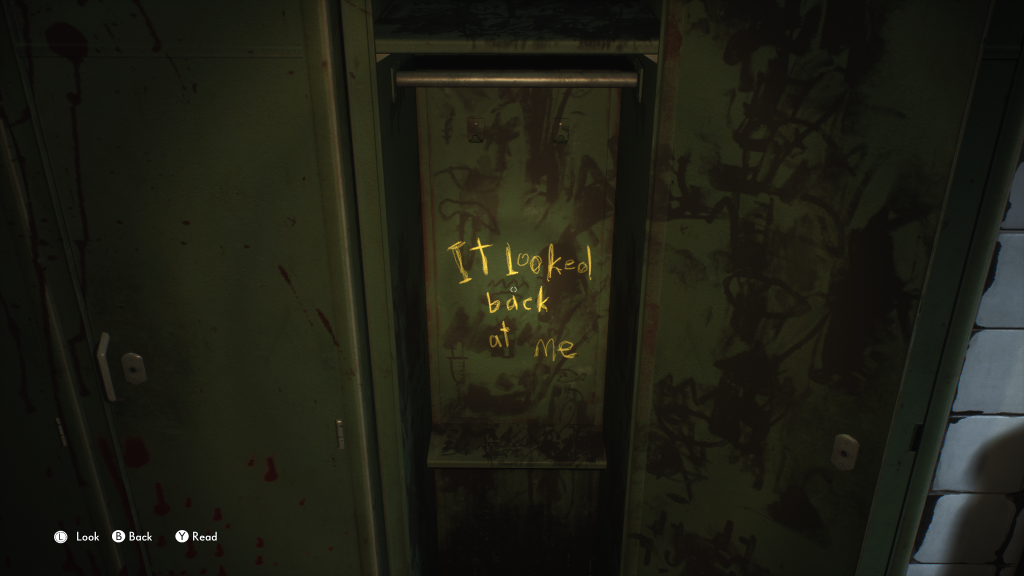 It Looked Back At Me. 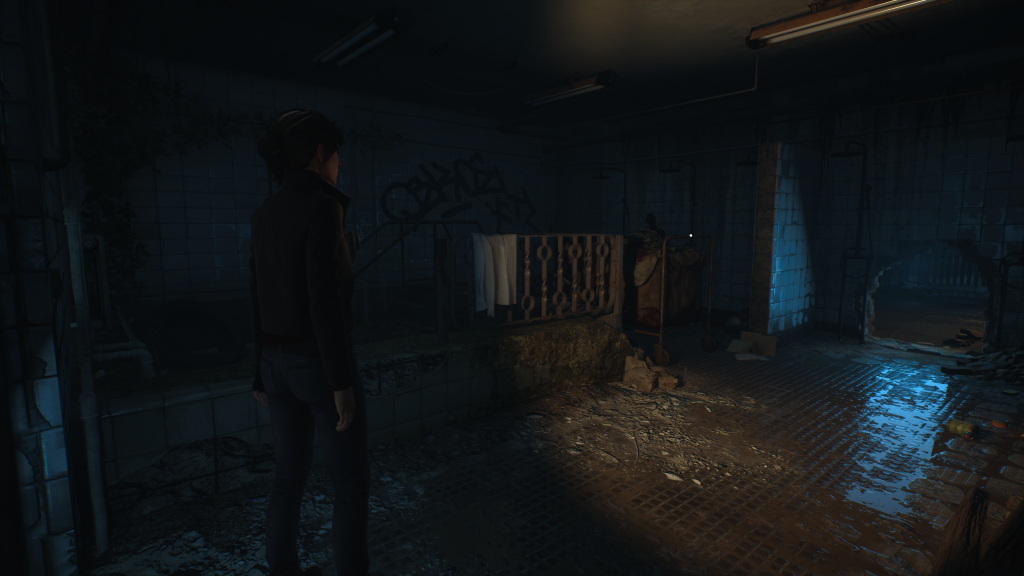 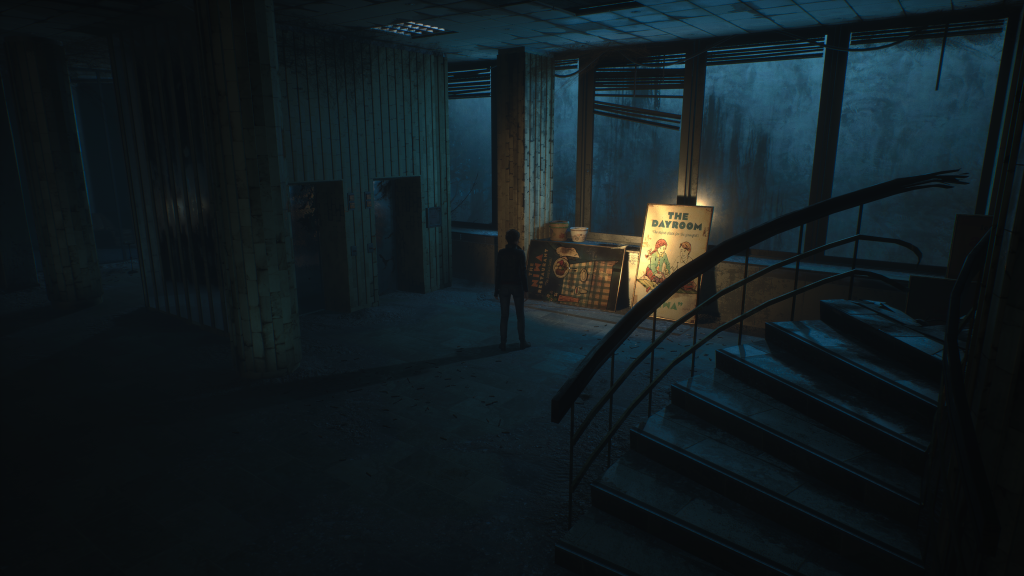 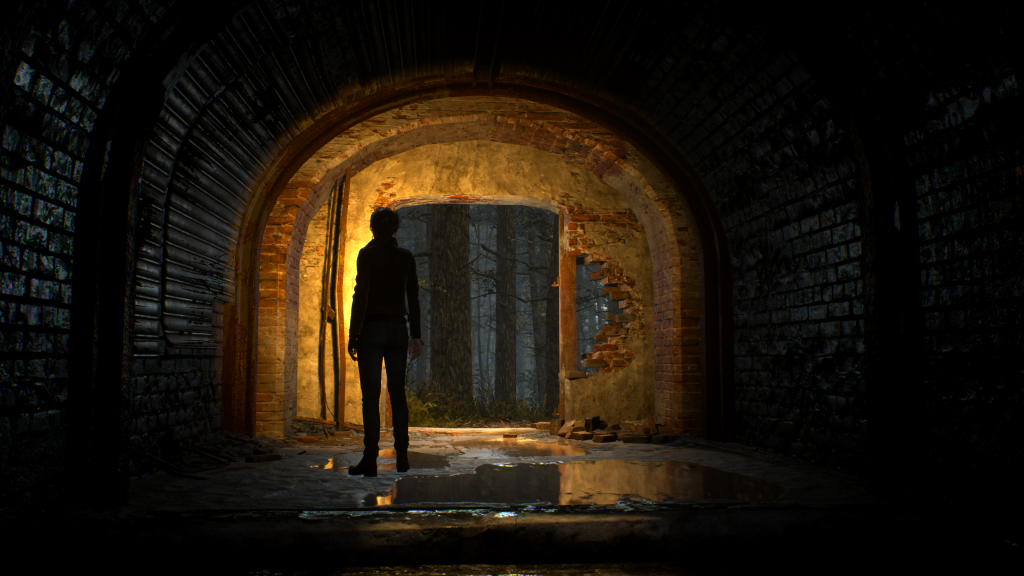 While the vibrant score deserves praise, the sound design is equally critical in instilling terror. Being that The Medium leans more towards the psychological aspect, sound becomes a key not only for survival but also is used to clue the player on what to do next such as observing an object of interest in a particular angle. Movement cues you to the direction you may need to head as well as tracking the hiding places of The Maw. It is the little touches that make the biggest difference. When Marianne examines items with her medium abilities, the intensity of the whispers will vary depending on the object. A solid pair of noise-canceling headphones is more important to the experience than any 4K monitor could ever be.

Marianne uses her medium skills to navigate puzzles and discover clues in her journey. This is something akin to what you may see in ghost-themed television shows and movies, where a medium is used to investigate a haunting. If Insidious were a game, this would be its incarnation. The puzzles feel like an ode to old school horror games of the 90s; however, they do feel guided which minimizes the difficulty at times. Often, it felt like each segment was on rails. However, there would be an occasional puzzle that would require more thought and discovery through the use of notes found in the environment. Some of the puzzles get fairly involved with one of the latter puzzles requiring a pen and paper to complete. 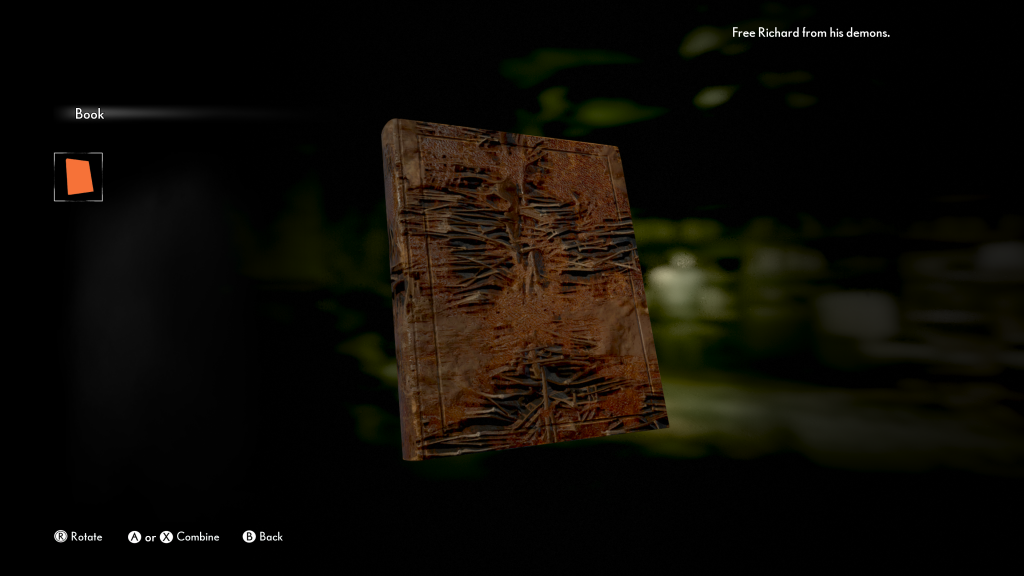 Bloober Team used the time they gained by delaying out of the Xbox Series X launch window to create one of the most bug-free, optimized games I have played in quite a while. It really contrasts with the mess that Cyberpunk 2077 was at launch, though admittedly The Medium is much more limited in scope. Aside from occasional flashing lights or pixelated squares popping in towards the end of the game, it ran like a dream.

I could not help but feel that The Medium took inspiration from many beloved franchises before it. The camera angle style, notes and puzzles to keep the player focused, and music that makes your skin crawl all combine to make The Medium feel like a worthy newcomer in a genre with a long legacy. In an era where first-person perspective and jump scares with mediocre psychological horror reign, it is nice to see The Medium take a different approach while utilizing many of the psychological horror tactics of old and new age audio tricks. I cannot help but love the new psychologically induced horror game Bloober Team made, The Medium.