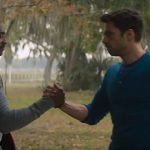 During the Super Bowl, Marvel fans did not get much in the way of trailers. In fact, the game really did not have much to offer for any movie fans. However, we did get a full trailer for The Falcon and the Winter Soldier.

This was not the first time we have seen The Falcon and the Winter Soldier in action together. The trailer does show off some of the other characters including some new villains and a familiar heroine. Since the end of Avengers: Endgame, Sam Wilson and Bucky Barnes have been working together as you can see below.

Right now, the show is still slated to be released on March 19th. Currently, The Falcon and the Winter Soldier is only going to get six-episodes that last about 50 minutes. If you are looking for a comic that might go with the show, check out Captain America: Sam Wilson. After Steve Rogers becomes an older man, he gives up the shield to his friend and ally Sam Wilson. Does that not sound just a little like the events at the end of Avengers: Endgame?

As you can see in the trailer, Baron Zemo gets his purple mask from the comics. Also, those people running around are supposedly in the Underground Liberated Totally Integrated Mobile Army To Unite Mankind. Or you can call them ULTIMATUM, a group in the comics started by Flag-Smasher to end all National Pride around the world. In the comics, they find out the group is actually funded by Red Skull through different shell companies. Since we do not have a Red Skull currently anywhere around Earth, I wonder who is truly behind this group.

It is going to be exciting to see how this show is different from WandaVision. With all that magic and mystery, and this action-packed show might be the best thing for fans. This is just one of the many Marvel shows that will be out in 2021. Those in the MCU include Loki, What If…?, Hawkeye, and Ms. Marvel.