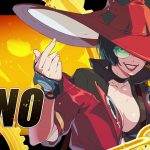 Guilty Gear Strive is currently hosting an open beta for PlayStation consoles. The beta allows access to thirteen of the fifteen playable characters in the base roster. After Anji was revealed as the 14th, fans speculated who would fill the last spot. Last night, Arc System works joined fighting game publishers at the 2nd Annual Japan Fighting Game-Publishers Roundtable. There they addressed questions posed by the community, development challenges, and how they hope to evolve the genre. Arc System Works also had a surprise for Guilty Gear fans with an all-new trailer.

Read More: Persona 5 Strikers Everything You Need to know

Guilty Gear Strive’s full roster is now complete. I-No makes her reprise for the series (still voiced by Kikuko Inoue). Her character design sports a rocker spin on witch apparel, complete with a guitar instead of a classic broomstick. The trailer shows she fits the “rush down” character archetype and has a unique hover dash ability to get in close to opponents. Taken from the game’s website, her character bio reads:

Her tendency to approach someone as if talking to an old friend can make I-No seem personable at first glance. She doesn’t shy away from using her feminine charms to deceive men, despite not actually having it in her to work together with anyone. She sees all others as lesser beings worthy of ridicule, even “That Man.” When faced with something or someone she finds irritating or alarming, she reveals her violent temper.

I-No has been reworked for Guilty Gear Strive like most of the cast. Joining her for the starting roster will be Sol Badguy, Ky Kiske, May, Axl Low, Chipp Zanuff, Potemkin, Faust, Millia Rage, Zat0=1, Ramlethal Valentine, Leo Whitefang, Nagoryuki, Giovanna, and Anji Mito. Arc System Works also extended the beta for Guilty Gear Strive. This is in light of server issues that have crashed the network on few occasions.

Extending the Open Beta Test:
We have decided to extend the Guilty Gear -Strive- Open Beta Test two days for all participants, ending Feb. 23 at 6:59AM PST.

🚨*Please note that the Open Beta Test game data can only be downloaded until Feb. 21 at 6:59 AM PST.

The extension is subject to change based on server stability. Overall, this is good news for beta testers who may have limited playtime due to other responsibilities. Guilty Gear Strive is still set to release on April 9th for PlayStation 4, PlayStation 5, and PC. Arc System Works has also announced a season pass for more fighters to come. Who have you enjoyed playing inside the beta? Which character will you main on the game’s release? Let us know in the comment section down below.