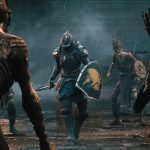 FromSoftware’s classic, Demon’s Souls received a shot in the arm in way of a modern remake. Although Bluepoint Games has kept most of the game intact, there are a few drastic changes when compared to the original. So, despite many of the original game’s flaws and quirky charms remaining unchanged, we still have 10 big changes to sort through.

In the Demon’s Souls Remake, Bluepoint has added a handful of new armor sets and weapons. Weapon-wise, the most notable being, the Reaper Scythe, and Ritual Blade as well as the Hoplite Shield. Initially, this brought about warranted concern from fans since these were included in pre-orders for the game. Although this didn’t 100% remedy the problem, Bluepoint’s solution was to make the items viable only in the early game. They accomplished this by making the weapons, initially powerful, yet players cannot reinforce them. Which, is a decent trade-off, but this still means you can’t technically obtain every weapon and armor in the game unless you pre-ordered.

When it comes to armor, Bluepoint has added the Blue-eye knight set. You can even wear the Fat Official’s set, which has a neat little twist-tied to the garb. See, unlike the original game, in order to rescue Yuria in 1-3, you have to wear the whole outfit. As opposed to the original game, where you only needed the hat to fool the Official into lowering the bridge. 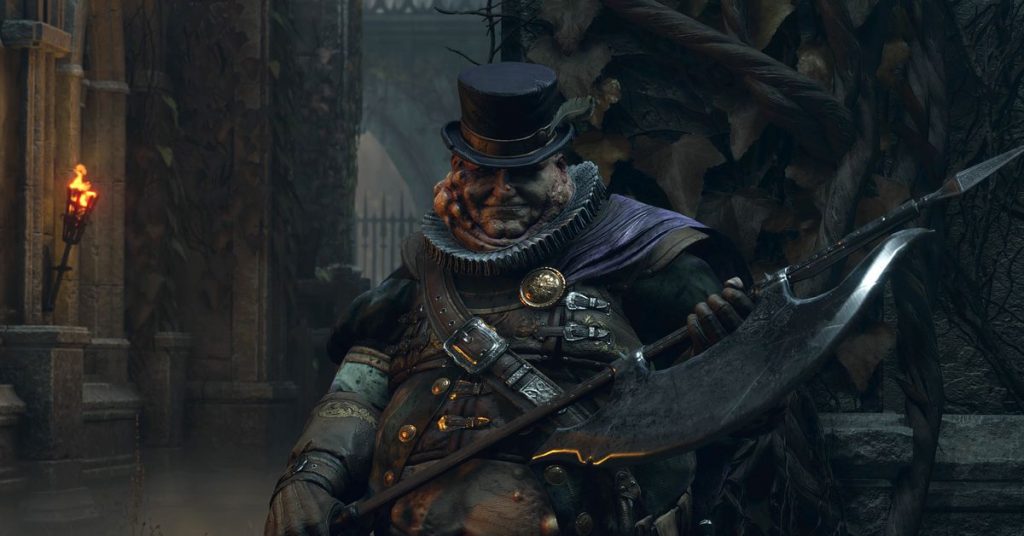 Did you know the original Demon’s Souls only had four directions in which the player could roll? It’s one of those things we take for granted now, especially in light of the Dark Souls trilogy and Bloodborne. But yes, there was a time where dodge rolling was frustratingly limited. Thankfully, in the PS5 remake, the issue no longer exists.

Bluepoint has given the game a much-needed quality of life improvement by adding omnidirectional rolling. Although some fans have found a few changes in the Remake controversial, this is one of the ones unanimously agreed upon favorably. 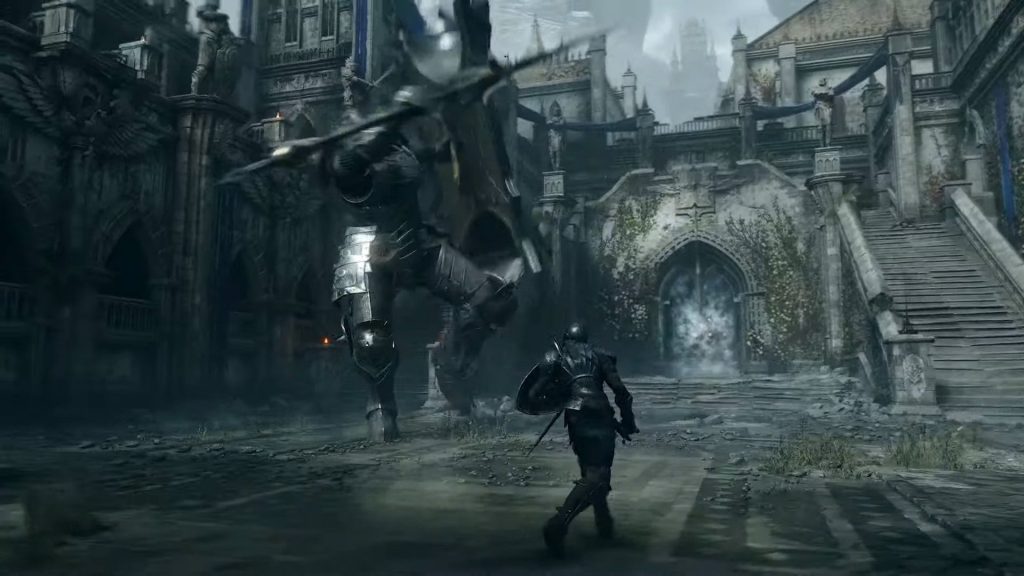 One of the biggest criticisms of the original game pertained to the healing system. In comparison to the limited Blood Vials or Estus Flasks carried in other games, Demon’s Souls grasses were overpowered. Not only did the game have serval types, like Crescent, Half-Moon, and Full-Moon which all healed larger portions of health depending on the type. But, also, the grass did not have an item weight. Essentially, meaning you could carry these grasses to your heart’s desire and spam heals during battle.

Bluepoint’s solution was to give the grasses a weight. This, in turn, limits how much you can carry. While you can still hold TONS of these, the grasses are not as overpowered as they once were.

In 1-4, Bluepoint has added a much-requested shortcut, unlockable by a lever, directly behind a previously locked door. Of course, this means you would have had to survive running past the dragon to reach this lever in the first place. This allows you to skip the run for dear life across the ramparts, where the blue dragon waits in earnest. Before you make said run, turn left and climb the ladder leading to this locked door. With the lever already pulled and the door now open, you can now skip to the dragon’s second roost and head straight for the throne room. You know, before the dragon swoops down and tries his damnedest to prevent you from entering.

This stands as one of the few instances of Bluepoint tweaking the level design. But, it’s a welcome change at that.

New to Demon’s Souls on PS5, is a feature dubbed, ‘Fractured Mode.‘ Enabled by paying 25,000 souls to the statue found in The Nexus and can be toggled on or off freely after the initial payment. Fractured Mode, essentially flips the game’s world horizontally. The intention here, being to test what veterans of the series have come to know and challenge their familiarity with the game. Fractured Mode also flips your character horizontally. Meaning, the character’s left hand is their dominant hand, yet you still attack with the R1 button. Seemingly, making an already disorienting experience, even more jarring. 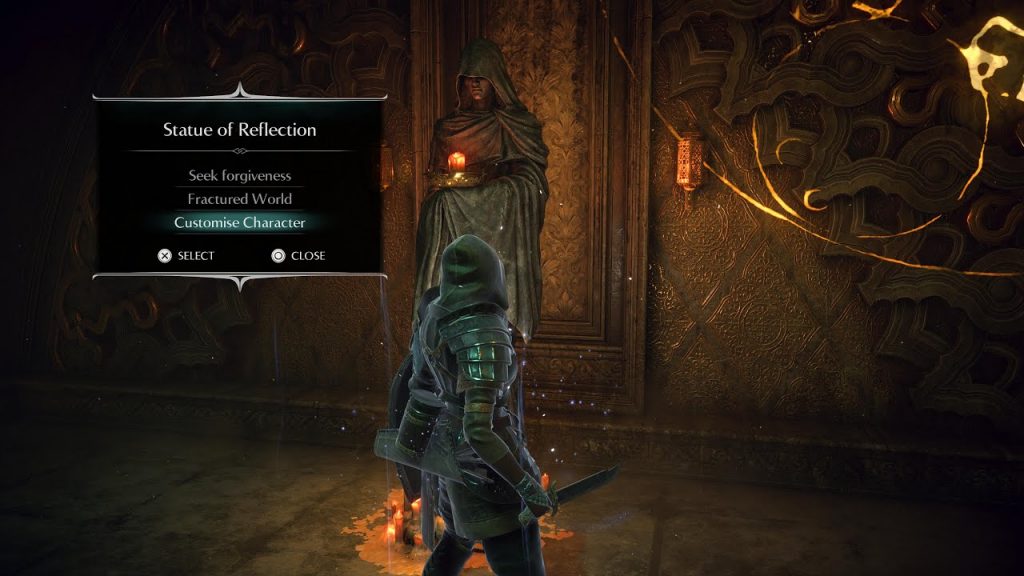 Another welcome addition comes in the form of new challenges within the game’s trophies. For instance, let’s take a look at the ‘Not Fooled’ trophy. As you fight the Fool’s Idol boss, the player is tasked with not hitting a single one of the clones she spawns. Which, for me personally, forced me to adopt a more defensive and cautious play style for her fight.

Another trophy, ‘One Shall Stand’, sees the player taking on Adjudicator without having him fall down. This one, was particularly tough making one of the easiest bosses in the game and morphing him into one of the toughest. His gimmick involves having a bird atop of his head, once attacked causes massive damage. But, with the bird so high up, you need to bring Adjudicator down to his knees to reach the bird. Obviously, If you want the trophy, you can not do this. So, I stayed up on the 2nd level of the arena and opted to hit the bird with ranged attacks.

Yet, what made this so frustratingly difficult, was the Adjudicator’s tongue being able to reach you on the 2nd floor. In most cases, even going through the floor. Again, this forced me to drastically change my approach for this boss and that’s all you can really ask for in new additions like these. All in all, these challenges promote players to experiment and try out new approaches as opposed to tackling familiar bosses in ways they have already tried before. 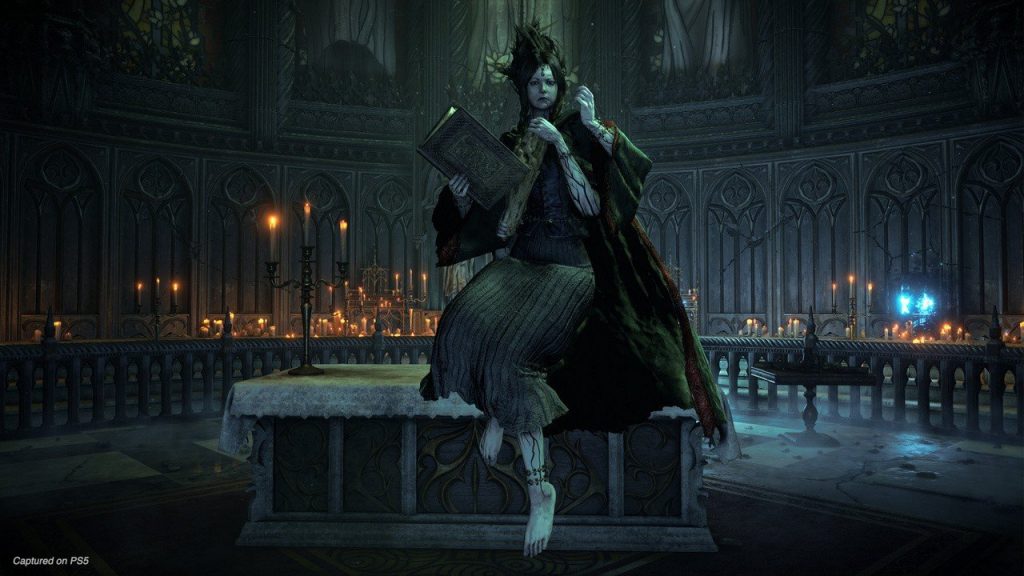 On top of Bluepoint bringing back the original cast and updating their dialogue, the remake also has re-recorded music. Demon’s Souls Remake recorded the soundtrack with a full, 120 member orchestra consisting of a choir and even a pipe organ. The same orchestra at the forefront of Bloodborne’s soundtrack.

Purely subjective as to people’s preference for the updated soundtrack, but I personally LOVE it. The music walks a fine line between the gravitas to match the scale of what you are facing, alongside melodies drenched with a blend of sorrow and dread. Some, forcing you to perhaps question your actions in-game. All of which, expertly chosen appropriately and may even change dynamically.

Personally, Maiden Astraea, Flamelurker, Storm King and One Craves Souls all stand out as pure ecstasy for my ears. When soundtracks make it into my car during long drives, that is a strong indication of how much I love them. 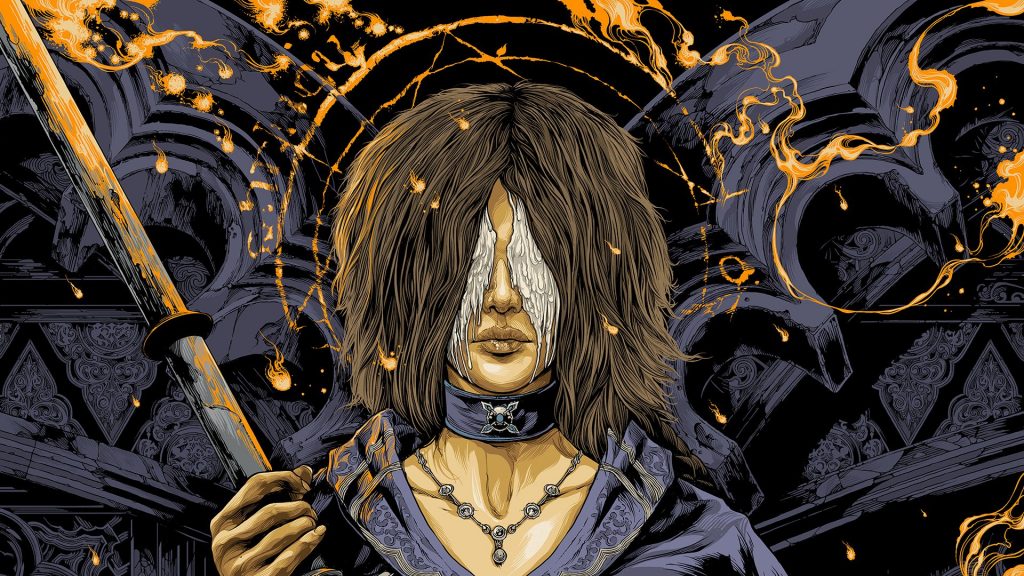 3. Tweaked Atmosphere in Tower of Latria

In the Tower of Latria archstone, the Prison of Hope remains one of the game’s most unsettling locations. Largely due to tight corridors bathed in darkness, cells holding tortured souls, and of course, those damn prison wardens. This is all further accentuated by the quiet, yet bone-chilling music played in the background.

This is all well translated to the remake as well, yet with one subtle change. Gone, is the background music from the original, and what we have instead, is Noble’s Wife filling the air with this lullaby-esque song. Equally unsettling in my opinion, yet perhaps has remained a constant to help calm these distorted prisoners. Personally, I find this incredibly immersive, with the thunder cracking above you and eventually stumbling upon the wife in her opened cell. You have this ‘ah-ha’ moment when it clicks, she’s the source of the music you have been hearing. Naturally, the song stops when you begin speaking with her, draping the prison in dreary silence. 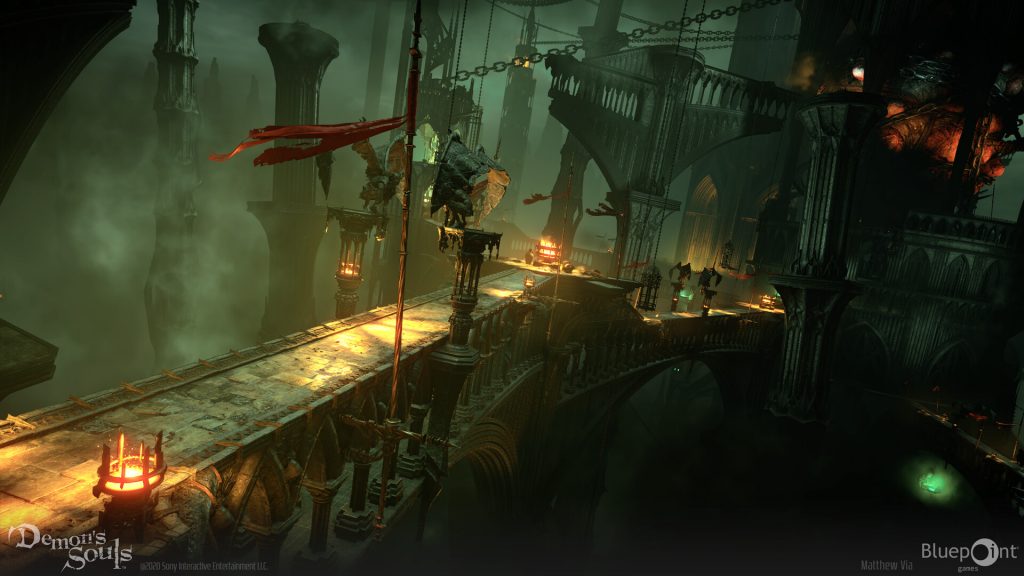 Obviously, with the age of the game, some measures were taken in order to modernize Demon’s Souls. Bluepoint went through the effort to mocap new animations helping update and ensure attacks are even more gruesome and visceral than ever. All of this, accomplished while maintaining the rhythm and cadence of the original vision. Each weapon class has been given new animations, including absolutely crunchy critical hit and parry animations. There are even critical hit animations for just using your fists as weapons.

Bluepoint truly knocked it out of the park on this front. 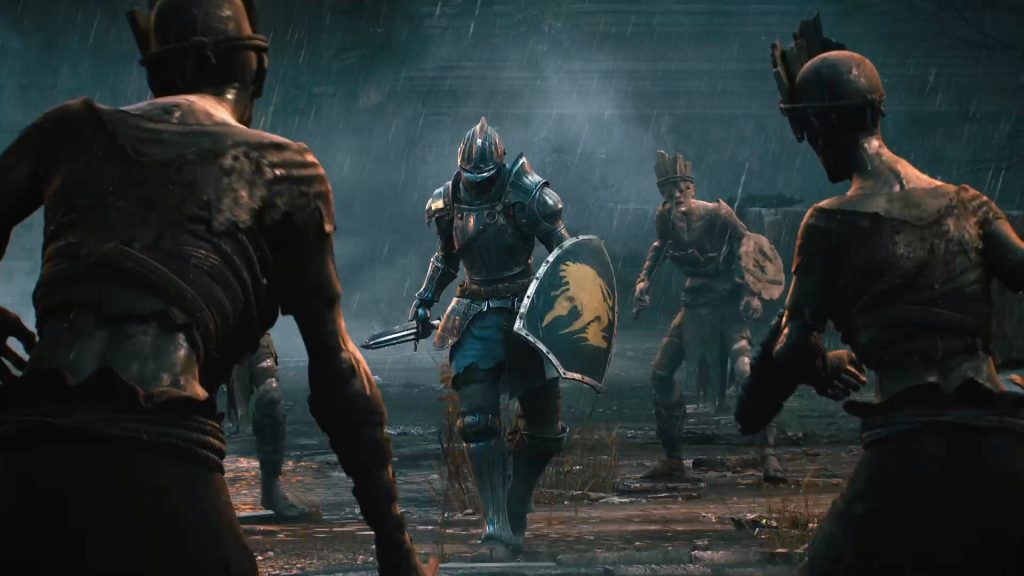 One of the biggest changes, perhaps the most well-known, in Demon’s Souls Remake, is the secret door in 1-3.

Relatively early after release, players discovered a locked door hidden behind an invisible wall in 1-3. Through Photo Mode, you can actually see the area behind the door as well as an item located on a bench. Players discovered you needed 26 Ceramic Coins, then trade said coins with Sparkly the Crow in order to receive a rusted key. Of course, there is the added twist of the coins only appearing in Pure White or Pure Black World Tendency. 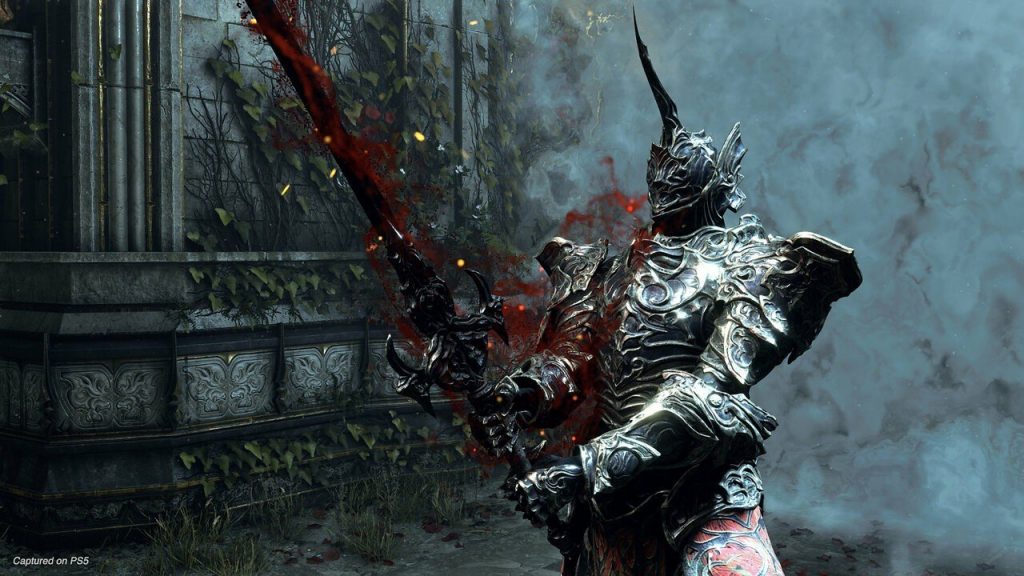 Once you open the door, you are led to a courtyard with the Penetrator’s Armor Set waiting for the taking. This was one of those examples of the power of social gaming. Where a community came together, put their heads together, and deciphered what was needed in order to pass through this door. Watching from afar, this was honestly amazing to see gradually come together, piece by piece. And I’m glad Bluepoint managed to add in a little scavenger hunt like this for players.