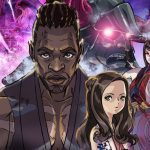 You are reading
Yasuke First Trailer has Arrived

Today, Netflix released the first trailer for Yasuke. The timing is auspicious, but the trailer is a genuine article. It pulls no punches showing what a Black samurai can really do.

Yasuke is an upcoming anime that draws inspiration from the real Black Warrior who lived in Japan’s Sengoku period. The first trailer teases how the African man comes to be adrift in this strange land. However, this anime will not shy from the fantastical. Yasuke’s first trailer is evident of that. Warriors shooting energy blasts and other incredible feats will be plentiful for the audience. In addition to the trailer, Netflix also provided an official show synopsis. You can check it out below:

In a war-torn feudal Japan filled with mechs and magic, the greatest ronin never known, Yasuke, struggles to maintain a peaceful existence after a past life of violence. But when a local village becomes the center of social upheaval between warring daimyo, Yasuke must take up his sword and transport a mysterious child who is the target of dark forces and bloodthirsty warlords. The story of Yasuke, the first African samurai who actually served the legendary Oda Nobunaga, will be released to the world.

Yasuke is being created by LaSean Thomas (Cannon Busters). Mappa is animating the show, while Flying Lotus will be handling the anime’s music. Lastly, LaKeith Stanfield (Knives Out) voices main protagonist Yasuke. The anime debuts April 29th, with this in mind, are you looking forward to a new samurai anime? Let us know in the comments down below.

Read More: My Pitch for a New Madden Campaign