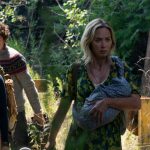 You are reading
A Quiet Place II Tops the Long Weekend

John Krasinski’s horror sequel A Quiet Place Part II had no issues taking the top spot this weekend. This wasn’t the only film that was released. Cruella was released on Disney+ and in theaters as well.

A Quiet Place Part II has grossed a healthy $58.5 million in its opening long weekend. This is one of many films that was pushed back due to the COVID-19 pandemic. It seemed like it was the right thing for the studio to hold on to this film for a while. The film was able to gross an estimated $48.3 million in just a weekend alone. Today’s take was a little over $10 million. At this moment this film is sitting at $80.5 million worldwide.

Cruella was released this weekend as well. It seems even with a release on Disney+ the movie did well. In its first weekend, Cruella was able to gross an estimated $26.5 million. Now when I say weekend I’m including the Memorial Day holiday that makes it a three-day weekend. If you check the numbers they may seem a little lower than what I’m listing. Spiral dropped down to third place this weekend with $2.2 million. This horror film was able to gross $27 million worldwide, this total might not be as high as the studio would have liked. Once the movie is released in homes it should do even better.

Theaters are going to continue with the horror theme next weekend. The Conjuring: The Devil Made Me Do It will be released on HBO Max and in theaters. This film is the third in The Conjuring franchise and eighth in the universe of movies. Currently, this group of movies is sitting at $1.9 billion, expect that number to continue to climb as more movies are being made.