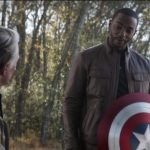 You are reading
Anthony Mackie Signed on for Captain America 4

The juggernaut that is Marvel’s Cinematic Universe continues to grow. It has been confirmed that a certain actor is going to have his first movie behind the shield. Anthony Mackie is officially in the next Captain America movie.

After the events of The Falcon and the Winter Soldier, it was only a matter of time. If you did not watch the show here are a few spoilers. Anthony Mackie is now our Captain America. He dons the shield after a journey through some serious issues. Variety is one of the first to report on this story.

This new multiverse is pushing Marvel’s movies into new directions. It will be nice to see how they push this new Captain America. Most of the characters have some sort of super-strength or power that sets them apart. One of the things that we do know is that the movie should be dealing with the after-effects of The Blip. Especially now that everyone is back and the world is getting even more crowded than before.

While we don’t have any more news on Captian America 4. This is the first piece of news that will start a steady waterfall of information. As Marvel continues to dominate with their movies, fans may not have been watching their shows. WandaVision was the first that was then followed by the Falcons journey. At this moment we have the animated series What If?… Which the show could include some sort of information on Captain America 4.

On to the next Marvel movie

The next Marvel movie to be released is Shang-Chi and the Legends of the Ten Rings. That film will be released on September 3rd. You can purchase tickets now, the movie will not be premiering the same day on Disney+. Fans have 45 days to watch this movie in theaters before it hits the digital market.