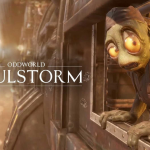 You are reading
Oddworld: Soulstorm Could Be Coming To Xbox Soon

The Oddworld franchise has been carving out its own unique path in the gaming industry for over 2 decades. Since the launch of Abe’s Oddysee all the way back in 1997, players have been in love with this franchise for a very long time. While it has had its fair share of developer and publisher changes over the years when Oddworld: Soulstorm was announced. Fans exploded with excitement at the prospect of a new installment in the franchise. Oddworld: Soulstorm launched on PlayStation 5 and PC in April of this year, with the game releasing day and date on PlayStation Plus. Now with a new teaser from the developers, it appears Xbox fans will be able to experience the game in the near future as well.

In a new teaser post from the official Oddworld Twitter account, it appears that an Xbox port will be on the horizon for Oddworld: Soulstorm. In a less than 30-second video, it shows Oddworld hero Abe opening a closed bag, then a melodic tone rings and a green glow emanates from the bag. Another big hint that it is an Xbox port, is that the video is simply titled “Abe Looks Good In Green”. While I wouldn’t call this an official announcement, it certainly is an on-brand style announcement from the game’s developer. We will likely be hearing more about Oddworld: Soulstorm and its upcoming Xbox release in the coming months. Until then, Xbox Oddworld fans will just have to sit tight and wait for the official word.

Are you interested in Oddworld: Soulstorm? Let us know in the comments and don’t forget to check back for the latest gaming news and information.