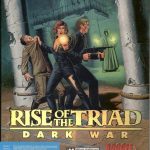 Rise of The Triad is an FPS game from all the way back in 1995. During an era of “Doom” clones, Rise of The Triad was a special gib filled adventure. Featuring 5 characters that all had different attributes and strengths, it brought a fresh take on the FPS genre at the time. While the game was remade in 2013 it a brand new remaster of the 1995 version of the game will be coming sometime next year.

Rise of The Triad Returns

In an announcement at Realms Deep 2020. It was revealed that Destructive Creations and Apogee Software would be teaming up for the remaster. In a short video, it was revealed that Rise of The Triads Remaster would be coming to consoles next. The list of consoles includes Xbox One, PlayStation 4, and Nintendo Switch. PC will also be getting a version of the to remaster as well. While there is currently no official trailer of the game so far. It is exciting to see an all-time classic come to modern consoles.

Will you be checking out the remaster when it comes to consoles? Let us know in the comments and don’t forget to check back for the latest gaming news and information.