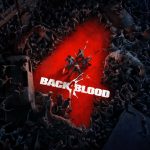 The Back4Blood closed and open betas have come and gone. The beta period gave us the opportunity to sink our teeth into bashing ridden skulls before they sink their teeth into us. While the chaotic core of the gameplay may be the main talking point coming out, it is the Back4Blood card system that perhaps deserves most of the spotlight.

Not only is it a system that feels like a natural progression to the original Left4Dead formula. It is the card system that could provide the most replayability and longevity for Back4Blood’s lifespan.

With a range of tactics, roles, and ever-changing conditions, the card system makes Back4Blood feel akin to some tabletop games that enable variety with each playthrough of the same game.

You begin Back4Blood with a small handful of cards that form your starter deck. Each card within the deck gives you a benefit such as increased reload speed or extra lives. Cards are broken up into several categories to help better organise and synergise your cards. 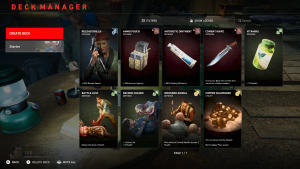 In order to expand your deck, you need to progress through Supply Lines. These are linear tracks that contain different rewards, including cards. While you initially begin with just a single Supply Line, completing it unlocks multiple others that you can then progress through at your choosing.

A single deck can consist of up to fifteen cards. However, you can create multiple decks to play and experiment with. Once you have a deck sorted it is time to jump into the campaign.

When you begin, the first card in your deck will remain active for the entirety of the campaign. After that, the remaining cards are shuffled and your card drawing luck, or lack thereof, is handed over to the card system gods. At the start of each new level, five cards are drawn from your deck. It is up to you which one becomes active and which ones get shuffled back into the deck. 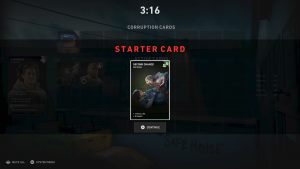 There is also one other type of card, corruption cards. These however do not belong to you. Instead, they belong to the hordes of ridden that are trying to bring your heroic ventures to a grueling end. Before you get to pick a card at the start of a level, the director will draw two corruption cards. These can range from challenges, such as a speed run challenging you to complete the level in a set time, to modifiers for the ridden.

The very nature of Back4Blood’s cards ensures plenty of replayability for the game. Crafting your own custom deck is essentially a create a class system allowing you to adjust your character to suit your playstyle and the needs of the team.

Take on the role of a supporting character by stacking up multiple different healing and life-focused cards. Or become a sweeping attacker by combining increased stamina regeneration with sprint shooting, allowing you to quickly move between teammates and mop up any ridden bearing down on them. 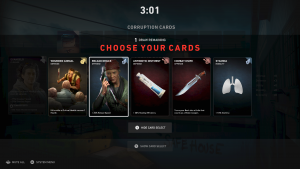 It is not just the variety of cards and synergy options between them that provide replayability. The staggered approach to how cards are activated also lends a hand. With players building up their power and class with each level you can wind up with entirely different playstyles using the same deck.

The staggered approach also encourages further teamwork. Communication is key in ensuring each player is building a character that can benefit the current situation. It creates an atmosphere similar to tabletop games such as Betrayal at House on the Hill. Where players have to work together with each turn and draw a card in order to survive.

If the active player cards did not provide enough replayability then the corruption cards do. Giving the ridden the power to turn each level on its head means players will never know what is coming. Only that it will most likely be bad for them.

One playthrough could see a corruption card envelope the level with mist. Forcing players to form a tight circle as they gradually creep over a bridge, unable to see 10 feet in front of them or the horrors that lay in wait amongst the mist.

Another corruption card could do away with the mist and instead throw unfathomable hordes of ridden at the players. Suddenly, the same bridge can no longer be taken with caution. Instead, a swift ‘leg it’ approach is needed in order to outrun the blood-thirsty beasts bounding at your heels. 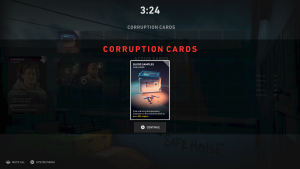 A mix of corruption cards available to the director can guarantee that no level will play the same twice. It is a system that once again sees similarities in several tabletop games. Pandemic and Forbidden Island both feature systems that allow the game to come back at the players without a moment’s notice. The tension as the cards are drawn, and the subsequent relief or anguish felt soon after, creates an ever-changing experience that is hard not to play again.

As well as providing plenty of replayability, Back4Blood’s card system could also play a role in ensuring a long life for the game. Of course, there is the obvious option of new levels through DLC and expansions. However, the addition of new cards for both players and ridden could provide life to new and old levels alike.

Looking at the structure of Back4Blood’s card system, and how closely it relates to those found in tabletop games, it is not too much of a stretch to predict that new cards is a route Turtle Rock Studios could take.

The previously mentioned tabletop games feature a range of minor and major expansions. Ones that provide cards to simply complement the existing pool and others that introduce entirely new mechanics. 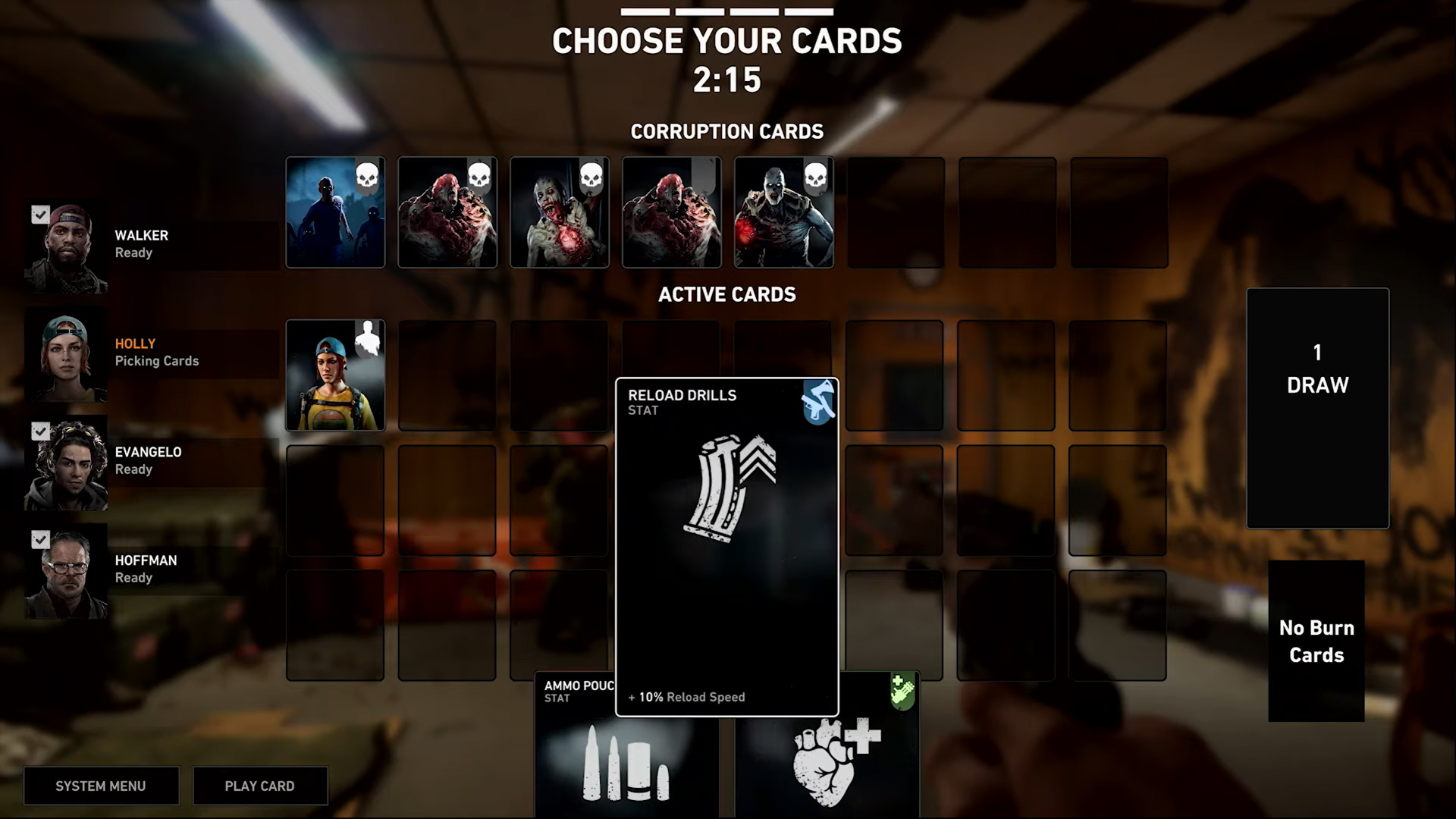 If Back4Blood takes this approach then we could see new classes and play styles open up with further cards. A shift in the deck ‘meta’ is sure to form soon after launch. We could see cards that previously clashed with each other begin to synergise with the inclusion of a new card.

We could also witness complete shifts in older levels. Optional-themed cards that introduce a new mechanic or provide drastic modifiers for existing ones can breathe fresh life into levels that have started to wear thin.

The Future Belongs to the Cards

With the way Back4Blood’s card system is set up, the variety for launch and future content is vast.

Active cards can provide unique playthroughs that allow you to play in a multitude of different styles. Corruption cards will keep you on your toes as you can never be sure what the next level will hold.

Once players begin getting comfortable with the base set of cards, new ones can be introduced to turn everything on its head. They can take on multiple themes and directions in order to keep each playthrough feeling new, exciting, and, most importantly, unknown.

The potential for a fantastic system is there. The cards are stacked in Turtle Rock Studios’ favour. Only time will tell if they play them right.