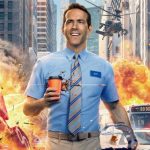 You are reading
Free Guy Takes on The Suicide Squad

This past weekend, it seems that Ryan Reynolds’ Free Guy was a smashing success. Given that the movie had plenty of competition, it looked like it might not take the top spot. In fact, it did just that and even got itself a sequel in the process. It seemed that The Suicide Squad was unable to do much this weekend.

Don’t Breathe 2 was also released this past weekend. It was able to take the second spot by grossing $10.6 million. The Disney Juggernaught has continued to push through these tough times. Jungle Cruise was able to add another $9.1 million to its $154 million worldwide total.

Respect grossed an estimated $8.8 million in its first weekend. The film was able to take the fourth spot at the box office. While Snake Eyes was unable to make a splash at the box office. Look for the film to hit a digital release this week. The film will be released on Blu-Ray and DVD on October 19th. The Suicide Squad dropped down a few spots. It landed at number five with $7.4 million. That gives this DC masterpiece a worldwide total of $117 million.

We’re going to see four movies fight for a spot in the top three this weekend. Reminiscence, The Night House, Finch, and The Protege will all be released this week. After that, we will be seeing Candyman and Shang-Chi and the Ten Rings in the next couple of weeks.