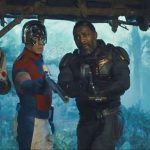 You are reading
Suicide Squad has a Dismal Opening in Theaters

This past weekend, The Suicide Squad was released in theaters. While many at Warner Bros. hoped for a large opening number this weekend, that wasn’t the case. Given that the movie was also released on HBO Max on August 5th, it was easy for people to avoid the theaters and stay home. However, it was able to take down Jungle Cruise in a battle of top summer movies.

While The Suicide Squad didn’t break any records this weekend in the theaters, plenty of fans were able to enjoy the movie at home. Thanks to a release on HBO Max, many of us saw the fantastic movie. Even if the film only grossed an estimated $26.5 million. The Rotton Tomatoes (92%) score was one of the highest for any DC film. With the current climate turning back towards possible lockdowns and new COVID-19 variants, don’t expect those high numbers to come back anytime soon.

Jungle Cruise dropped down to second place. It grossed an estimated $15.6 million in its second weekend in theaters. Even with a release on Disney+, this film is now sitting at $121 million worldwide. Black Widow was able to gain $4 million this weekend. Domestically, this film is sitting at $174 million and $359 million worldwide. Even with the issues between Scarlett Johansson and Disney, Black Widow has done really well at the box office.

One of the bigger movies this year is finally slowing down. Fast 9 was only able to gross $1.2 million at the box office. It doesn’t look like this film will be crossing the $700 million mark at the box office. Right now, the film is sitting at $661 million worldwide. Fans can actually watch the movie at home now through a digital release. Look for this movie to drop out of the top ten after this weekend. It might be too early to say, but The Suicide Squad might not even cross the $200 million mark in the next two weeks. We still have plenty of movies coming out that could easily take the top spot.

Three movies will be coming to theaters this upcoming weekend. Respect, Don’t Breathe 2, and Free Guy will all be looking to take the top spot. Currently, it looks like Free Guy might be able to have a great opening weekend as it could stop The Suicide Squad from staying on top of the box office.