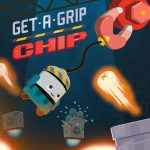 Iron Lords Podcast and the Lords of Gaming are live on the floor of Play NYC 2021 and got a chance to chat with some of the developers of grapple platformer Get-A-Grip Chip.

In Get-A-Grip Chip, players assume control of a Chip working in a factory. After your boss gets hit in the head with a cog, she loses it. The boss starts blasting lasers everywhere, causing immediate danger to you and your Battery Bot colleagues.

In its essence, the game is a charming and satisfyingly challenging grappling hook 2D platformer. Master the hook and fling through the increasingly intense floors of Roboco Mfg. Chuck Chip over chainsaws, launch over lasers and even escape chases with Scan-It Janet.

The game consists of 30 levels across 5 diverse worlds. Be sure to check out the full interview below and the rest of LOGNET’s Play NYC coverage. Don’t miss our interview with the developers behind Rushdown Revolt and Shoulders of Giants pre-alpha gameplay footage.