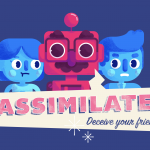 Iron Lords Podcast and the Lords of Gaming are live on the floor of Play NYC 2021 and had the chance to interview the developer behind the title Assimilate! It’s a party game that consists of three rounds of finger-pointing fun.

In the game, each player is either a human, robot, or programmer the robot’s best friend. They need to work together in order to win. However, the only problem, the humans don’t know who their fellow humans are. So, they’ll have to use logic, deduction, and teamwork to figure out who they can trust.

The game supports between 5-10 players and is similar to Jackbox Party game where you link with your smartphones on a TV or computer to play.

Be sure to check out the full interview below and the rest of LOGNET’s Play NYC coverage. Don’t miss our interview with the developer of KungFu Kickball and Squish.

You can wishlist Assimilate! on Steam and itch.io. and will be available on August 26 for $9.99.