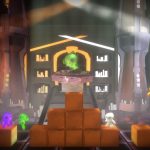 You are reading
Play NYC: Get Flat In Tetris MOBA Squish

As part of this week’s Play NYC, we had the chance to play Squish. A new take on the MOBA genre with a hint of Tetris. In Squish, players will push each other out of the way as classic Tetris-like blocks fall. You must avoid bombs and other hazards as you push three other players into pitfalls. All while avoiding becoming squished from the side, or from above.

Of course, we are not ready to crown Squish as the next Fall Guys or Killer Queen Black yet, it is fun. There is an element of Super Smash Bros. couch co-op, along with quirky costumes that make Squish entertaining at worst. Plus having a dab emote tied to a button is an excellent way to win me over.

Squish is being developed by Grave Rave Games and published by PM Studios. You can sign up to play a beta version of the game here. As well as visit the games Steam page to wishlist. A Nintendo Switch version is planned for a later date. I highly recommend you sign up for the beta and give feedback. If Squish can find its missing ingredient as the team heads towards the finish line, they might create something special. Certainly, a game to watch for during the Indie news cycle next year.