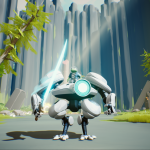 You are reading
Play NYC: Shoulders of Giants Could Be A Massive Hit

As part of this weekend’s Play NYC, we had the chance to talk to Moving Pieces, the team behind Shoulders of Giants. Along with our interview, we have captured around five minutes of gameplay. The content we captured comes from a very early build of the game.

Shoulders of Giants is an action roguelike, you play as a charming frog that rides a companion robot. The character combination is a delightful reminder of a time when nearly every game had an animal-like mascot. The end result is something like Slippy from Starfox riding Baymax from Big Hero 6 but cool.

While Shoulders of Giants has fun nostalgic vibes, the gameplay is immaculate and tight. Hold the L trigger for the frog to focus their gun, then use R to fire. When it comes to close combat you can use the R trigger for swing attacks delivered by the robot. The combat mechanic has you seemingly switching between both the robot and the frog. Blows to enemies feel tangible as their meter bars are emptied, an all-around joy.

If Moving Pieces can bring life to the enemies as they did with the environment and characters, they could have a massive indie hit on their hands. The level design, combat, traversal, and protagonists are worthy of the biggest stages in indie gaming. The small team from Brooklyn will have some time to build something special as Shoulders of Giants is still in early development.