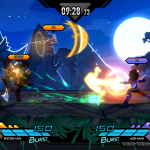 It is not very often that you will see fighting games from Independent studios. Especially fighting games that are geared at a hardcore fighting audience, leaning away from a more casualized experience. That is what makes Rushdown Revolt such an incredibly unique fighting game from developers Vortex Games. Our very own Lord Cognito was able to sit down with Cako who is the CEO of Vortex Games at this year’s Play NYC. He offers insight into why the team decided to focus on creating a more challenging fighting game experience. As well as talking about the game’s narrative and how it tells a personal story for the studio and the challenges they have faced.

Rushdown Revolt is currently available on Steam, with console versions planned for the future as the game continues to grow. You can watch the entire interview below, as Cako also offers insight into whether or not you could see Rushdown Revolt on the Steam Deck in the future.

Are you interested in Rushdown Revolt? Let us know in the comments and don’t forget to check back for the latest gaming news and information.