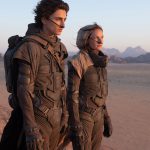 You are reading
Dune Enjoys the Halloween Weekend

This past Halloween weekend Dune was able to stay at the top of the box office. The new releases actually couldn’t get into the top five except an anime from Japan. While all of that was happening James Bond and Michael Meyers were fighting to be in the top three.

Even with an HBO Max release Dune was able to gross more money than any movie prior. The film grossed an estimated $15.4 million this week. Dune has been able to not only have a strong presence at the box office, but it has also captured the hearts of fans and those that have never heard of it. While the number one movie had no issues staying at the top. As I’m writing this article Dune crossed that $300 million worldwide mark. Expect this film to almost get to $400 million. With The Eternals and Ghostbusters: Afterlife coming out in the next couple of weeks, it won’t be making much more money.

Halloween Kills and No Time To Die continued to fight for the rest of the top three. Antlers was only able to gross $4.2 million in its first weekend. Last Night in Soho grossed $4.1 million as well. This is the first weekend these two movies were released in theaters. The third new release actually did better than those two movies. My Hero Academia: Worlds Heros Mission was able to gross $6.4 million in fewer theaters. This film was released in 1,581 theaters while Antlers(2,800) and Last Night in Soho(3,016). As you can see the fan base really was behind My Hero Academia: Worlds Heros Mission.

The reviews have been primarily negative for the next Marvel movie. It is the lowest reviewed MCU movie to date with a 53% Rotten rating on Rottentomatoes.com. This really shouldn’t mean much since it is a Marvel movie. Eternals will be released this coming weekend. Look for it to topple Dune as the top movie at the box office. I expect to see this film make at least $70 million in its first weekend.