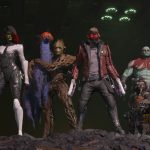 2021 has seen a myriad of surprises in the video game sphere. However, I’m sure many didn’t expect this: Marvel’s Guardians of the Galaxy is one of the best games of the year. While it stumbles on a few space rocks along the way, the game fully delivers on a larger-than-life Marvel adventure.

Meet Your New Guardians of the Galaxy 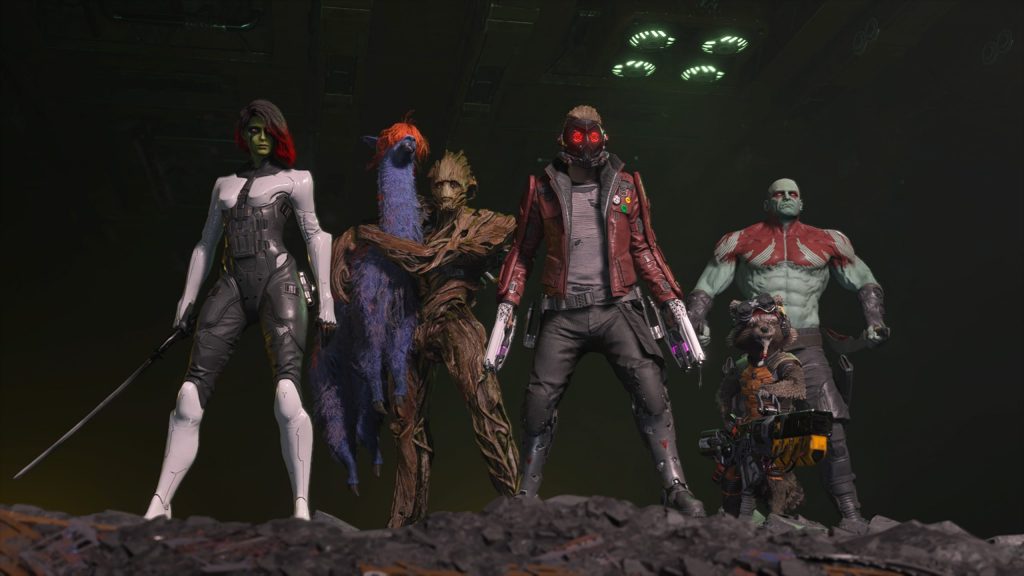 Marvel’s Guardians of the Galaxy brings a fresh take to the eclectic cast compared to their on-screen counterparts in the MCU. Chris Pratt is not your Star-Lord and Dave Bautista does not play as Drax here. Rather, a whole new cast of voices and faces headline the game, making this developer Eidos-Montréal’s very own Guardians of the Galaxy. For perspective purposes, that’s one tough and steep hill to climb. Especially since audiences, including myself, are so accustomed to the MCU versions of these characters.

The game features the characters MCU fans are familiar with: Star-Lord, Drax, Gamora, Rocket Raccoon, and Groot. It also introduces characters comic fans will recognize like antagonist Lady Hellbender, Nova Corps officer Ko-Rel, Nicholette Gold, and even Adam Warlock. As far as the main cast goes, their caricatures are recognizable. Star-Lord is the charismatic and witty leader; Rocket is still a smart-ass; Gamora is the closed-off warrior, etc. So what ultimately makes them different from previous iterations? This is where Eidos flexes their creative muscle. The developers provide not only fresh origin stories for these characters but heart-wrenching twists and choices throughout the 15-hour journey.

A Tale As Old As Time

Marvel’s Guardians of the Galaxy somehow pulls off telling an origin story while in the middle of the group’s decision to work with one another. Star-Lord, Rocket, and Groot are already partners in crime while Gamora and Drax are the newly-added members. What follows is the story we’ve seen before: a band of misfits figuring out how to work as a team to save others and, well, the galaxy. 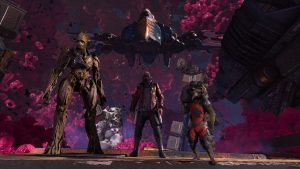 What sets this tale apart is the unsuspecting character arcs like Star-Lord’s learned revelation within the first few hours of the game. Or Drax’s secrets amid his glorified status as “The Destroyer.” A moment that sticks out to me, and one that even made me emotional, is a conversation between Drax and Star-Lord. Both have a deep connection I never realized until now – they are deeply affected by the death of their loved ones. That conversation is explored in the game and it’s done so beautifully. It’s something I never would have anticipated for a Guardians of the Galaxy game.

There are numerous emotional beats like this that turn your partner AIs into characters you’ll love to be around. It also helps that Eidos nails the moment-to-moment conversations. Dialogue and banter are snappy and hilarious, even if a bit winded.  However, there were a number of times a character line was cut off as I progressed a level. This may be grating for some players, but it’s a Guardians trope at this point and you either love it or hate it. Regardless, there were a ton of downright hysterical one-liners to enjoy. Drax’s many phrases of unintended insults will always be hilarious to me. 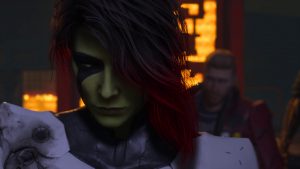 Eidos should be given huge kudos for having Guardians of the Galaxy’s dialogues be partially player-choice driven. It’s not Witcher 3, but the player’s input does matter for multiple scenarios for this linear story. Marvel’s Guardians of the Galaxy excelled in hooking me into its diverse worlds and rooting for its characters. The Guardians are given motivations to band together, but the least compelling lies with the villains. Whether it was botched line delivery or lack of hard-hitting storytelling beats from main antagonist Grand Unifier Raker, I couldn’t care less. By end credits, I reflected more on my time with the Guardians than if Raker’s grandiose view of reality pushed them to be the heroes they were meant to be. By no means does the wet fart villain make this journey less exciting though.

GOTG Got Me Hooked on a Feeling

Marvel’s Guardians of the Galaxy is a linear third-person action game that takes a very simple approach to its gameplay. When you’re not fighting, you’ll be traveling from point A to B through levels solving platforming puzzles. Some puzzles include the tools earned for Star-Lord or with the assistance of a Guardian. I loved going through levels with the group because it added to their attempts to work as a team even if they disagreed and bickered. Luckily, these puzzles aren’t overused either. So you’ll thankfully won’t be in one section for too long.

Players will sadly only be able to play as Star-Lord but can call out attacks from other members in battles. Enemies have a stagger bar that can be filled, which when achieved, incapacitates them. Think Final Fantasy VII Remake‘s action-packed battle system, but with four other members on the field instead of just two.

The magic in gameplay lies with the synergy of the characters. Tell Groot to hold enemies in place, then ask Rocket to throw a bomb in the middle to wipe out a wave. Ask Drax to jump on a target to fill its stagger bar, then send Gamora in for a sweeping kill. Initiating team attacks like these felt immensely satisfying to pull off.

Boss fights and skirmishes in the game are more about fun chaos than strategic planning or stringing together combos. It was like having an adrenaline rush every time fights started because ability cooldowns are fast, enemies are aggressive and the music got my heart pumping.

Marvel’s Guardians of the Galaxy knocked it out of the park on its collection of ’80s music. The tunes were especially impactful during the game’s “Huddle Up” battle mechanic. If things seemed grim in a fight, Star-Lord will call out to his teammates to huddle up.

From there, players can inspire their teammates for a brief boost in stats, then charge in battle with a random ’80s song running background. “Huddle Up” was an idea I thought would be annoying since it essentially pit stops firefights. On the contrary, it ended up being my favorite part about the battle system. Inspiring my Guardians and getting that boost of motivation with a classic rock song to kick butt – this never got old. It would undoubtedly make the fight more epic, hilarious, or somewhere in-between. From Rick Astley’s “Never Gonna Give You Up” to Europe’s “The Final Countdown”, it’s in these over-the-top moments that makes Marvel’s Guardians of the Galaxy so much fun to play. 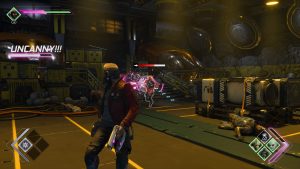 A Marvel To Look At

Guardians of the Galaxy has never been afraid to get visually weird and creative. Thankfully, the game’s art style is no different. You’ll see the oddly-shaped and vivid structures in dense jungle forest, neon lights and holograms in populated cities, large crystalline figures spiking out the ground in an underwound cave, and more. Even if you are just going from point A to B, the game has no shortage of diverse environments and has excellent gameplay pacing. 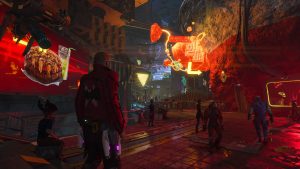 While it’s easy to sing the praises of Marvel’s Guardians of the Galaxy, the game doesn’t come without its shortcomings. Particularly, the technical issues. Visual glitches, like characters popping into a new scene, happened on multiple occasions. Voice lines would also be out of sync from a character’s mouth movements here and there.

I lost count on the number of times I needed to restart a checkpoint too. This would stem from bugs blocking progression like not being able to shimmy against a crawl space to get to the next area. One bug had Star-Lord in an infinite loop, in which he would shimmy against a wall, reach the other side, then automatically turn around and shimmy to the opposite side. There are quite a bit bugs and glitches that can’t be overlooked. 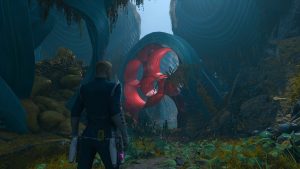 In performance mode on PS5, the game was confirmed to run at 1080p resolution, 60fps with some occasional dips. This is the mode I recommend to play on as combat feels prime at 60fps. However, for those with a new 4K TV, performance mode can look blurry. On my LG C1 OLED, the game’s visual fidelity was noticeably blurry with hair textures looking low-quality.

Quality mode goes for 4K, 30fps with some noticeable visual enhancements like texture quality and lighting. Combat at 30fps is… rough to say the least. Some action games can pull off a good-feeling 30fps, but Marvel’s Guardians of the Galaxy is not one of them. These spotty performance blemishes didn’t sour my experience overall, but it was sure worth noting. Marvel’s Guardians of the Galaxy could have definitely used an extra coat or two of polish before shipping.

Marvel’s Guardians of the Galaxy Will Be in GOTY Conversations

I’ll say it again: Marvel’s Guardians of the Galaxy is one of the best games of the year. It will absolutely be in Game of the Year conversations. Eidos did fantastic in executing a fun and engaging combat system. The game also encourages multiple playthroughs with different dialogue branches and unlockable costumes and collectibles. Aside from technical setbacks, the game is a thrilling, goofy, and heart-warming space epic. Even if you’re an MCU fan and love James Gunn’s versions of these characters, playing Marvel’s Guardians of the Galaxy felt like I was meeting them for the first time all over again. I sincerely hope this won’t be the last time we see them.

8.8
A space epic that delivers heart, laughs and a flarkin' great time