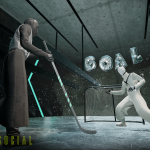 Competitive multiplayer VR shooter VAIL VR has announced the upcoming game will feature a social hub. VAIL Social will be an online space in the game where players can come together and relax or partake in a number of activities.

The aforementioned activities included mini-games, listening to music, and even watching movies together. In the trailer, you can see players partaking in a game of ice hockey. Other activities include dancing in a nightclub-like setting, and just relaxing.

In addition to VAIL Social’s general hub, the space will also act as the game lobby. This is a brilliant idea for players waiting to enter a game. An issue that can plague multiplayer VR games with smaller player bases seems to have been mitigated with the upcoming VAIL VR.

VAIL VR is currently hosting a closed alpha where those invited will be one of the first to test VAIL Social. Interested players can request access on the Steam page, or join the Discord.