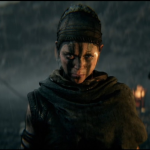 You are reading
Hellblade 2 Gets Its First Gameplay Trailer

Today is the Game Awards which means a massive celebration of the gaming industry is on its way. Celebrating the creativity and hard work of all the developers who developed and published games in 2021. As is tradition with the Game Awards we have a wealth of new trailers and announcements to be excited for. A new trailer for Hellblade 2 is an announcement to get excited about.
During the show tonight, we got a fresh look at Senua’s Saga: Hellblade 2, the upcoming sequel from the 2017 classic Hellblade: Senua’s Sacrifice. The game was first revealed at the 2019 Game Awards alongside the reveal of the Xbox Series X. In this new trailer, we get a look at some of the beasts that Senua will be facing in this Viking-themed hellscape. This is also the first official gameplay we have of the upcoming title, which is undoubtedly one of the most highly anticipated Xbox Series titles.

Are you excited about Hellblade 2? Let us know in the comments and don’t forget to check back for the latest gaming news and information.