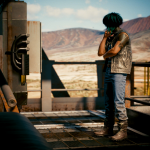 Remember back in 2020 when Cyberpunk 2077’s hype train was going full throttle and we expected a legendary video game? Fun times, which got even better once we realized its upgrade wasn’t ready at launch.

CD Projekt’s bleakly futuristic open-world game went from hotly anticipated to infamously disappointing upon release. Now, over a year and innumerable bug fixes later, Cyberpunk 2077’s upgrade came out this week. Yes, later than expected but it’s here. There’s no denying the visual upgrade’s quality, but that’s really the only reason to go back in.

When the Lords of Gaming first played Cyberpunk, we each wrote about our first five hours in-game since we didn’t get a review code. Overall, our assessment came down to two things: promise and bugs. Promise and hope from what we saw so far, yet major concern over the technical performance.

Personally speaking, as the person who roasted his old Xbox One into oblivion (metaphorically, I swear), I remember feeling lucky I missed all of Cyberpunk’s initial issues. After I cleared the game, my main takeaways revolved around the side stories and those technical failings.

Now, more than a year later, we finally get to see what this game should look like on the Series X/S and PS5. Does it matter when bugs like below still frequently happen?

The Witcher 3: Wild Hunt, CD Projekt’s previous project, and its post-release rollout highlight how bad of a spot Cyberpunk 2077 has been in. Not only did Witcher release to wildly high praise, but CD Projekt kept adding extra content to it. It ranged from free new outfits to full-fledged DLC releases.

Jason Schreier touched upon this in his book, Blood, Sweat, and Pixels:

Somehow, the game was more massive than any of them had anticipated. Perhaps to overcompensate for that persistent fear that they wouldn’t have enough content, they’d wound up making too much…They made a big show of giving out free downloadable content for The Witcher 3.

Now, where’s Cyberpunk 2077? Still getting fixed, and it’s not there yet. Cyberpunk 2077’s upgrade is a unique challenge; The Witcher 3 was only released on the PS4 and Xbox One generation, whereas Cyberpunk 2077 launched on those and their successors. That does not excuse its current state and near future.

Cyberpunk 2077’s greatest tragedy is still that such an enjoyable game got buried under so many failings. This game is by no means on its predecessor’s level, but I’d be lying if I said my now 55-60 hours of gameplay were wasted. I enjoyed playing Cyberpunk 2077.

This was a game I’d come home and play after working overnight when I worked at Target. Hell, even though I said I’d only lightly check out Cyberpunk 2077’s upgrade, I’m on pace to dump another 50 hours into this game. The update does make the game look better and might be the hook that reels me back in long term.

Cyberpunk 2077 didn’t turn out to be a masterpiece, but this is still a game that knows how to grab and keep my attention. That is CD Projekt’s biggest sin; burying this gem under a mountain of bugs.