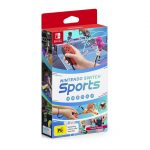 Today February 9th, 2022 Nintendo held a Direct to highlight the upcoming Nintendo Switch games. Among them is the latest info on Nintendo’s quality of life franchise. The Direct brings a new trailer and new details for the upcoming Switch Sports.

Nintendo Switch Sports will have volleyball, badminton, bowling, soccer, jousting, and tennis. Along with the returning modes, there is the classic motion control gameplay. This time around there will be a leg strap accessory included with the physical version of the game. With that, it brings an added level to the motion controls that now include kicking. Nintendo plans to bring free updates to the game through the year, including a Golf mode

Wii Sports is known as the pack-in game that came with the Nintendo Wii console. Wii Sports has sold over 82 million copies and is one of the most popular games of all time. Switch Sports will serve as its successor and use the leg strap that is included with Ring Fit Adventure. Nintendo Switch Sports will launch on April 29th, 2022, and will launch will free updates throughout the year. An online playtest is planned for February 18th through the 20th for Nintendo Switch online subscribers.