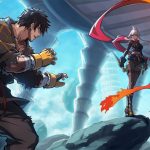 DNF Duel is a spin-off fighting game of Dungeon Fighter Online. The title releases on June 28. Previously, the game held two open betas that garnered much praise and attention. The developers surprised fans with a new trailer showcasing new modes and lore from the universe. Here is the trailer for DNF Duel Story Mode.

Read More: Starfield Needs to be a Lesson to Xbox

The world of Dungeon Fighter Online is vast. The spin-off title already benefits from this with a colorful cast of fighters. However, it was uncertain if there would be a Story Mode. DNF Duel is launching at $49.99 in the U.S. The game seems just shy of AAA fighting game pricing.

Yet, the DNF Duel Story Mode trailer calms these fears. Storytelling is drawn in a beautiful visual comic style Neople (developers of Dungeon Fighter Online) are known for. Fans get hints of the narrative through several instances bouncing between Berserker on the run, Striker in over her head, and Dragonknight on the verge of death.

We also received a first look at Hound Cyrus. She is a Demon Slayer from Dungeon Fighter Online. This possibly alludes to her arrival as the first DLC fighter in the season pass.

Lastly, the DNF Duel Story Mode trailer showcased the gallery and glossary. Here, fans can learn more about the extensive universe as well as view art illustrations, character-specific sounds, and movies from the story.

Are you excited about the story of DNF Duel? Which character would you like to make a playable appearance from Dungeon Fighter Online? Let us know in the comments down below! For all things DNF Duel, bend the knee in the realm of Lords of Gaming.