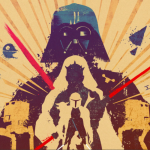 Star Wars Celebration is a cultural phenomenon. This convention brings the Star Wars community together for the epic space opera. Consequently, it delivers a center stage for exciting new projects coming to the mythos of Star Wars. Here, I compiled a list of the biggest announcements from this year’s event.

Disney and Lucasfilm continue to deliver amazing content on Disney+. Now, fans have a growing universe of connected shows on the platform. Additionally, new movies are in the works set in the sequel era, video games are in production, and more. These are the latest updates.

Andor is a series starring Cassian Andor from Rogue One: A Star Wars Story. The show serves as a prequel to the movie. Chiefly, fans will see a darker side to the Rebel Alliance and life as a spy. Andor comes this year on August 31 to Disney+.

Clone Force 99 is back for round two. The Bad Batch will continue following this motley crew of clones during the rise of the Empire. Consequently, they are constantly on the run trying to do good and seem to make new allies next season like Cody. Stream the new season this fall on Disney+.

Star Wars Celebration holds exclusive viewings for certain panels. These viewing show early footage or teasers of shows and movies to attendees. Disney and Lucasfilm showed off The Mandalorian season three and Ahsoka this year. The former is set to debut in February 2023. Meanwhile, Ahsoka has just started production.

Tales of the Jedi

Star Wars: Tales of the Jedi is a newly announced, six-part animated mini-series. Dave Filoni explained the show brings back familiar faces in a traditional story-telling format. The premiere episode featured baby Ahsoka and her family. Other notable characters teased for the series: Qui-Gon Jinn, Yaddle, Mace Windu, and more. See the show unfold only on Disney+.

Star Wars Jedi: Survivor is a sequel to the critically acclaimed Star Wars Jedi: Fallen Order. The series follows Cal Kestis, a Jedi survivor of Order 66. The Empire and the Dark Side continue to oppress the galaxy. Seemingly, Cal and his friends face new foes and obstacles in the sequel. 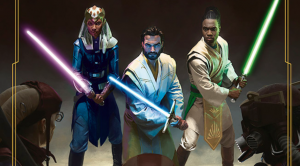 Star Wars: The High Republic is a multi-faceted publication project for Star Wars books and comics. It has a similar feel to the phases of the MCU. Phase II will begin in 2023 with a new slew of books and comics following new adventures within the time period of the High Republic. Convergence by Zoraida Córdova kicks off the next phase in October of this year.

This wraps up the biggest announcements this year for Star Wars Celebration. The event will return in 2023 at the Excel Center in London. However, this time the convention will be held from April 7-10. 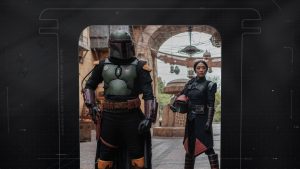 This year also introduced new offerings to the Disney Parks in form of merchandise and entertainment. Meanwhile, other comic and show projects were talked about in detail during celebrity panels. You can find footage of all the interviews here on the official youtube page. The official website will hold more press details for the panels.

What was your favorite announcement from Star Wars Celebration? Let us know in the comments down below. For all things Star Wars: bend the knee in the realm of Lords of Gaming.