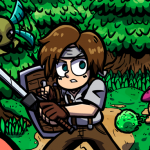 You are reading
Airoheart, A Salute To 16-bit Zelda Games, Gets Switch Release Date

Soedesco will publish the action-adventure RPG for Nintendo Switch on September 30, 2022. This announcement follows the closed beta that took place back in February 2022.

This ode to 16-bit adventure classics clearly wears its inspiration on its sleeve. From everything I’ve seen, the game looks charming and triggers immense doses of nostalgia. Airoheart is Pixel Heart Studio’s first game, and the studio says, “We won’t release Airoheart until it is the absolute best we can make it!”

Pixel Heart Studio’s main goal is to release Airoheart on PC and Mac. However, the studio has reached another goal and is bringing the game to Nintendo Switch. The studio has stated that they would also like to see Airoheart released on PlayStation and Xbox. Hopefully players across all platforms will have access to the game, as it looks delightful.

The game takes place in the fictional land of Engard. “A diverse continent on the cusp of war, and factional strife,” according to the game’s Kickstarter. “However, when Airoheart is unwittingly hurled into a much darker and sinister plot that could end in the decimation and enslavement of all life. A dire situation involving centuries of history, and family tragedy push Airoheart to confront his greatest fears. Test the strength of his heart, and even his very moral fibre.”

Here’s a description and overview of the Airoheart, courtesy of Pixel Heart Studio’s Kickstarter:

“Airoheart is a top-down story based, puzzle platformer with classic real-time combat. Crafted in a gorgeous 16-bit pixel-art style, with modern 3D-lighting to make it all the more beautiful.”

“Airoheart is an ode to the deep and emotional story telling of the Final Fantasy series. Whilst also adopting the style and charm of early classics from The Legend of Zelda series. Its graphical art style and music are heavily inspired by such franchises. With the core gameplay elements closely resembling that of ‘A Link To The Past’.“

“It embraces old-school real-time combat situations, mixed with puzzles and platforming sequences. All from the much loved top-down pixel art perspective of the mid-90s.”

You can check out the gameplay trailer for Airoheart here:

Personally, I can’t wait to play this game. I think the Nintendo Switch is the perfect home for a 16-bit, A Link to the Past inspired game. Pixel Heart Studio has seemingly nailed everything from the art style to the game play. The Kickstarter has a large section dedicated to the game’s music and that’s incredibly promising. A game like this needs a soundtrack that also harkens back to its inspirations. Seeing that the studio understands that is encouraging.

Earlier this year, I went to the grand opening of Limited Run’s retail store and I would love to go back to grab a copy.

Will you be keeping an eye out for Airoheart? Let us know in the comments below!