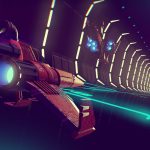 You are reading
State of Play June 2022: No Man’s Sky Announced for PSVR 2

Originally released in 2016, the space-exploration game initially failed to live up to the promises of its lead developer. However, after many years of consistent updates, Hello Games’ flagship title now has a large and devoted fan base.

A VR version of No Man’s Sky has existed on multiple platforms since 2019. Time will tell how Hello Games will leverage the PSVR2 hardware to enhance the experience.