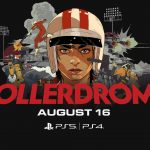 You are reading
State of Play June 2022: Rollerdrome

Today June 2nd, 2022 Sony held a State of Play presentation focused on third-party published titles. Along with some new PS VR2 games. The live-streamed digital broadcast is part of this summer’s Summer Game Fest. With that, we got a fresh look at upcoming PS5 and PS VR2 titles including the announcement of Rollerdrome.

Roll7, the creators of OlliOlliWorld bring a brand new shooter on wheels. Rollerdrome features a hand-drawn art style and a catchy synth-pop groove. While the game is a vast departure from their previous games, this will still be a smaller single-player game. At first glance, Rollerdrome feels like it could be a fantastic multiplayer shooter. The more we learn about the game, however, the more we see in common with OlliOlliWorld. We will find out more when Rollerdrome releases exclusively for PC, PS4, and PS5 on August 16th.

For now, though, see excerpts from Roll7’s press release below: