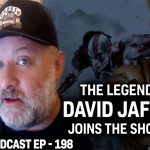 You are reading
Shocked to Bits: 1-on-1 Interview with David Jaffe

Welcome to Shocked to Bits featuring up-and-coming content creator Bit Cloud Gaming. Dive deep into the video game industry with news, analysis, interviews, and coverage that will leave you shocked to bits. Episode 198 of The RGT Podcast welcomed the legend David Jaffe to the show.

His contributions to the gaming industry have led to two of the most iconic games in the history of PlayStation that have spawned a legacy from Twisted Metal to God of War.

From Film School to the Video Game Industry

David Jaffe was super excited to share with us his amazing career with PlayStation as a Game Designer from its early beginnings. Jaffe talked about how he was motivated to get into the entertainment business from the very start.

Jaffe believed he was destined to be a part of the industry when he began going to film school at The University of Southern California. He believed this was his true calling from the start as he sold numerous shows which unfortunately never were made with his dreams of Hollywood.

Dwindling down a bit, Jaffe decided to take a job with Sony as a tester in Santa Monica which was around the corner from where he lived at that time. It was clear as day the moment he stepped into the building that video games were making heavy strides in terms of storytelling and writing. This sparked similar creative ideas for him. When he originally was solely focused on making movies, it quickly dawned on him that he could replicate what he did in film school with video games through interactivity.

Since he is a huge fan of Star Trek and video games, this fully motivated Jaffe to pitch his ideas to Sony. At the time, most of the talent pushing the industry forward were artists and coders. They primarily focused on design work. However, after successfully pitching his idea to Sony, Jaffe had a lot of resources at his disposal. This fueled his creativity and convinced him that developing video games was his career of choice.

What Inspired The Creation of Kratos?

At the 37:03 mark of the podcast, we asked Jaffe what inspired him and the team at Sony Santa Monica to create Kratos. Jaffe explained that when he joined the team to bring the game to life, he had the idea for the game to be an action-adventure cinematic universe influenced by Onimusha & Devil May Cry. However, when it came to the thematic side of the game, Jaffe took inspiration from comic book heroes such as Wolverine and Hulk. Influence also came from aggressive films such as Romper Stomper and American History X as well.

Jaffe further explained that the inspiration behind this was due to him wanting pure animalistic aggression, violence, anger, power, and energy. The last two traits, in particular, were the north star that guided the team and they never compromised them.

My name is Ryan I am a youtube content creator who primarily covers PlayStation content on the youtube channel Bit Cloud Gaming with daily news coverage on Fridays I host the RGT Podcast a podcast where I interview developers as well as voice actors within the industry and also we discuss all the latest news and rumors for Playstation, Xbox, And Nintendo live at 5 pm est