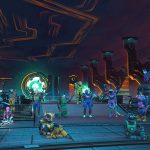 You are reading
No Man’s Sky Beyond Update Has Launched

Today, No Man’s Sky will be receiving it’s largest update ever. Not only is it the largest, but it is also 100% free. The update is expected to bring massive changes to the universe, so what are these changes?

Well there are a lot, but let’s focus on the biggest changes to expect:

Whether you have PSVR or the Occulus Rift, the VR support will allow you to move between VR and standard gaming with ease. While in VR and new, easier to use HUD. This is good news for anyone wanting to experience No Man’s Sky via virtual reality.

Most multiplayer sessions nearly double from what was previously allotted. In the Space Anamoly, on all platforms will be able to support up to 16 players. Most other sessions will increase to 8 players for console whereas PC can now support up to 32. The Space Anamoly will offer a robust social hub to meet with old and new friends. The update will also include a full character model with customizations viewable by other players.

Another thing the Space Anamoly will be bringing to No Man’s Sky will be all-new missions. These will include everything from standard quests to building missions. Construction for the base building will also include new construction trees that will also have new tutorials to help even experienced players learn. New recipes will also give you the ability to tame alien creatures you see roaming the planets you are exploring.

For more details on all of the updates, check the official page for everything that the Beyond Update is bringing to No Man’s Sky.