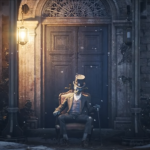 Gamescom 2022 Opening Night Live was an exciting gaming event. With a wealth of new announcements and updates on already revealed titles, there were over 30 games showcased across the almost 2-hour show. While it sometimes feels impossible to remember every single game that’s revealed at these showcases. There are always a handful of games that will stand out. Here are my 5 favorite games from Gamescom 2022 Opening Night Live.

It is safe to say, that Soulslike games are the new hot trend in the gaming industry. This likely isn’t going away anytime soon with the success of From Software’s Elden Ring. While we will undoubtedly get a wealth of clones that do very little to change up the formula. Lies Of P from developers Neowiz gives off some incredible Bloodborne vibes while still being incredibly unique. Telling a reimagined story of Pinnochio, players will explore the fallen city of Krat. A city filled with gothic horrors and mechanoid creatures just waiting to kill you. The gameplay showcased in the Gamescom trailer looks tight with a variety of different weapons that will be at your disposal.

Lies Of P also looks to be taking a unique spin on the narrative of Pinnochio. Your choices and whether you lie or not will directly affect both gameplay and story arches. The focus on narrative is something that some Soulslike games are sadly lacking. It will be interesting to see if Lies Of P is able to deliver on its ambitious goals in 2023.

Dead Island 2 has been a journey in terms of its development. After being revealed at E3 2014, the game had essentially gone dark after its reveal. While many had speculated for many years that Dead Island 2 had been canceled and development scrapped. Deep Silver the publisher of the title, had long denied the cancellation. Clarifying the project was still being developed within its studio family and they would have more to share at a later date.

Now fast forward to 2022, over 8 years after the E3 reveal, and not only did Dead Island 2 get a new trailer, but it also received a release date of February 3rd, 2023. While the release date might change, as there has been no shortage of delays within the gaming industry lately. But one thing will not change, and that is the fact that the Dead Island 2 trailer was great.

As a massive fan of zombie games, it’s hard for me not to get excited about Dead Island 2. Especially, since the game looks like it will take a more comedic angle to its story than Dying Light 2, and with no Dead Rising games on the horizon. It feels like there is a void in the more humorous zombie-killing action games. Here is hoping that Dead Island 2 delivers on this, after almost a decade since its original reveal.

Atlas Fallen has perhaps one of the most impressive CGI trailers at Gamescom 2022. Keeping in mind that the trailer was CGI of course, this game immediately spiked my interest for a handful of reasons. The main premise of this game looks great, as it appears to heavily borrow from Monster Hunter.

While there really aren’t any big AAA games that do what Monster Hunter does, it’s exciting that a new IP looks to tap into that genre. What is even more exciting is that Deck 13 is the studio behind it. For those that are not familiar with the studio, they are the creative minds behind The Surge series. Which is one of the more memorable Soulslike games from the Xbox One/PlayStation 4 generation.

With Deck 13’s knowledge of third-person action RPG mechanics from The Surge combined with a co-op-focused RPG monster hunting game? It sounds like it has a lot of potential to be a special game. Atlas Fallen is set to release in 2023, though with its lack of gameplay and heavy CGI focus. It feels more likely that it will be a later 2023 that might even slip into 2024.

There is a wealth of Chinese history that feels completely untouched in the gaming sphere in comparison to other cultures. However, games like Black Myth: Wukong and the newly revealed Where Winds Meet look to change that. From developers Everstone Studio and backed by Netease, Where Winds Meet is an action game set in the Northern Song Dynasty. Perhaps one of the most exciting parts of the reveal was the fact it was packed with gameplay and combat in motion. Hinting at a mythological angle to how the story is told, alongside blending cutscenes with fast-paced combat was brilliant.

In a showcase that was sadly lacking a lot in terms of actual gameplay, Where Winds Meet knocked it out of the park. The blend of sword fighting and intense martial arts action was thrilling. As someone who practiced martial arts for over 20 years, I am beyond ecstatic at the rise in martial arts-themed games over the past few years. It is a trend that I hope will continue.

There is a beta test planned for the game later in 2022, and the game is currently set for release on PC only. This does not mean the game might not come to consoles at a later date. Currently, however, the game will only be available on PC for the foreseeable future. With that being said, PC players will certainly have a unique action-packed martial arts game to sink their teeth into soon.

Now I know this final pick may not be everyone’s cup of tea. But as someone who grew up on point-and-click adventure games on PC, Return To Monkey Island quickly shot up my most anticipated games list when it was announced earlier this year. With an all-new more modernized art style, and the return of series co-creator Ron Gilbert. Everything seems to be lining up for Return To Monkey Island to be a worthy new installment in this influential series.

Perhaps the best part of the Gamescom trailer for Return To Monkey Island was that it perfectly conveyed the tone that we have come to expect from this series. The fourth-wall-breaking humor has been something I loved about the old Lucasarts adventure games. Set to release on September 19th, 2022, on Nintendo Switch and PC. We will not have to wait much longer to get our hands on Guybrush Threepwood’s next adventure.

What was your favorite game reveal at Gamescom 2022? Let us know in the comments and don’t forget to check back for the latest gaming news and information.