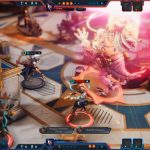 You are reading
Gamescom 2022: Moonbreaker Revealed

Gamescom 2022 opening night live is an event packed with new trailers, information, and release dates from the biggest upcoming games. From big AAAs to impressive Indie titles, there is almost something for everyone at Gamescom 2022. One of the biggest surprises of the show this year has been the reveal of Moonbreaker by Unknown Worlds.

Moonbreaker is an all-new turn-based game from the developers of the Subnautica developers. The game will be launching into Early Access on September 29th.

Moonbreaker is a turn-based strategy, tabletop tactics game. Designed to be a true digital miniatures experience, set in an expansive sci-fi universe crafted by Brandon Sanderson. Direct Captain & Crew to determine the fate of the Reaches in gripping, ever changing competition & adventure. – Steam Page