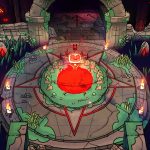 You are reading
Review: Cult of the Lamb

Game types and genres allow us to classify and pigeonhole the barrage of games released on a weekly basis. Game types like Shump, Metroidvania, Sim, and Strategy are defined by over 30 years worth of games. Through heuristics, the gaming community has come to use these abbreviated descriptions to efficiently disseminate, “not for me” or “for me.” Though what happens when two genres of gameplay styles on opposite ends of the spectrum meet? In Cult of the Lamb (CotL), we get a mix of Dungeon Crawling Hack and Slash, blended with a Basebuilding Sim. The end result comes in what could be the best indie game of the year. 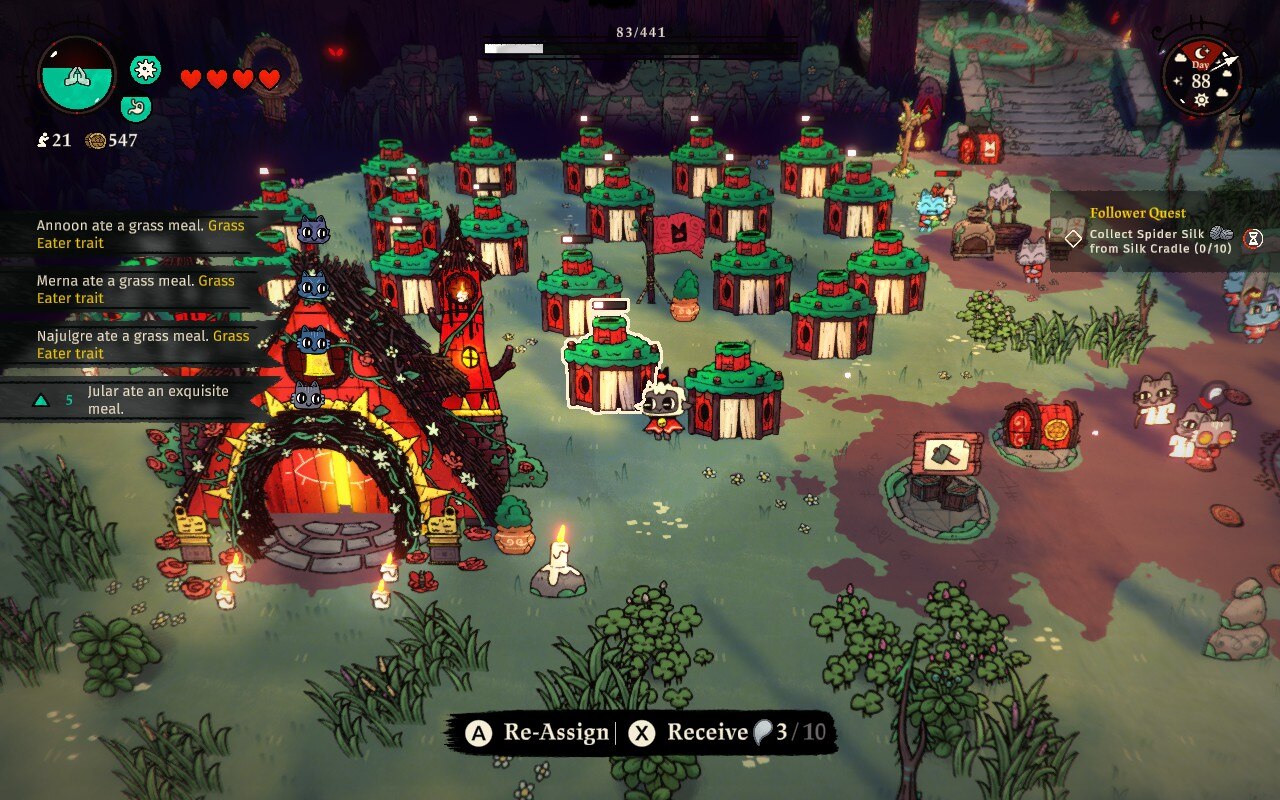 In Cult of the Lamb, you’ll play as well… a lamb. The story begins when you are reincarnated by The One Who Waits. Upon your return to life, you are tasked with assembling a cult in exchange for your life. Immediately you discover a cult needs both resources and indoctrinated members. With that, the story will take you through four levels to gather materials and search for new recruits.

Through the four levels, you will navigate branching paths. You won’t be able to see the level in its entirety with one playthrough, the design is intentionally linear with no backtracking. The areas are designed for multiple short passes to collect resources, with runs lasting between 10 and 15 minutes. At the end of each dungeon, you will encounter a sub-boss until the fourth pass through which ends with the level’s primary nemesis. The design and art direction within the four levels have room to grow, the sameness between them leaves something to be desired. One level has more blues, one level has more browns and that is about it, a lone weak spot within the game.

If you have played some of the more popular dungeon-crawling hacks and slash dodge roll indie games in the past five years you will feel right at home. Similar to the aforementioned games, you use the left face button to swing a sword, ax, or hammer. The right face button gives you the ability to dodge roll through any attack. Followed by the top face button which is for ranged attacks. The dodge roll will have you avoiding small rooms full of waves of bullets, tentacles, and bombs.

Cult of the Lamb Has Action 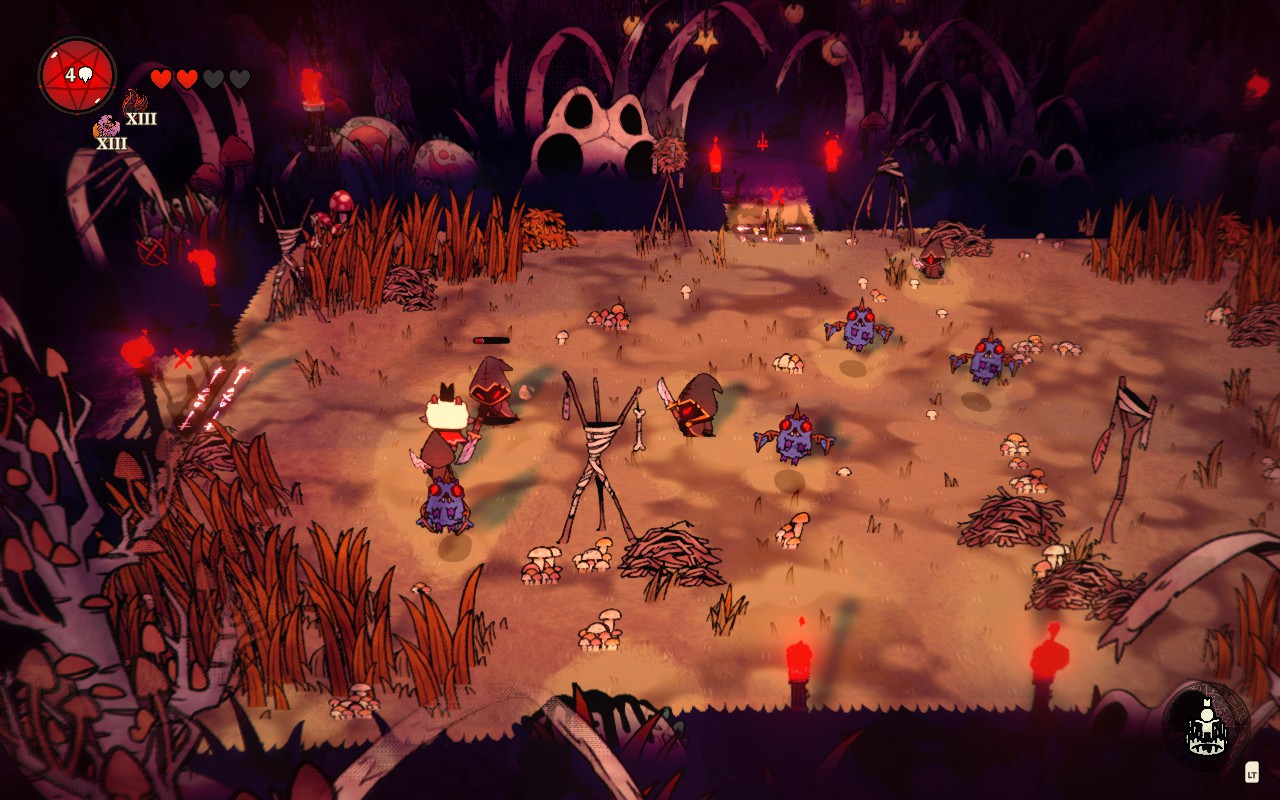 The combat is basic in the sense that there are no combos, nor can you dynamically change weapons. You can only equip one ranged weapon and one primary attack weapon at a time. As you enter each level, there are randomly generated weapons, and as you reach certain rooms you have the option to exchange for something more powerful. This brings complex depth to the combat system that gives the game weight. There are a ton of unique weapons along with a nice mix of enemies, giving the straightforward combat a feeling that never grows stale. In addition to 36 unique modifier cards (curses) that can be found through the dungeon runs. So while the combat is not very complex there are other layers that make the game feel dense. Some curses can modify how combat and health restoration work and adds a nice dynamic element.

With action-adventure hack and slash elements in Cult of the Lamb, there always feels like there is some sort of tradeoff. For example, the combat is not very deep but there is a wide variety of weapons. There is no wide open large sprawling world yet, the shorter compulsion loops of hunting and gathering bring a constant kick of dopamine. I always felt like I was able to go out and find exactly what I needed quickly. What Massive Monster has here is so addictive. The short runs can add up to the game’s 10 to 15-hour completion time quickly. If you are a completionist it could take you up to 20 hours to collect everything.

Hunting and gathering will bring you into the game’s second genre. Cult of the Lamb has a strong base-building sim element that you will discover after your first dungeon run. This element is very much like Animal Crossing in nearly every way. Although in Animal Crossing New Horizons, the game is slowed down by the time of day elements.  With Cult of the Lamb, the game never takes its foot off the pedal. Having action-adventure elements in CotL, there is no need to artificially extend the length of the game through a slow-moving sim. 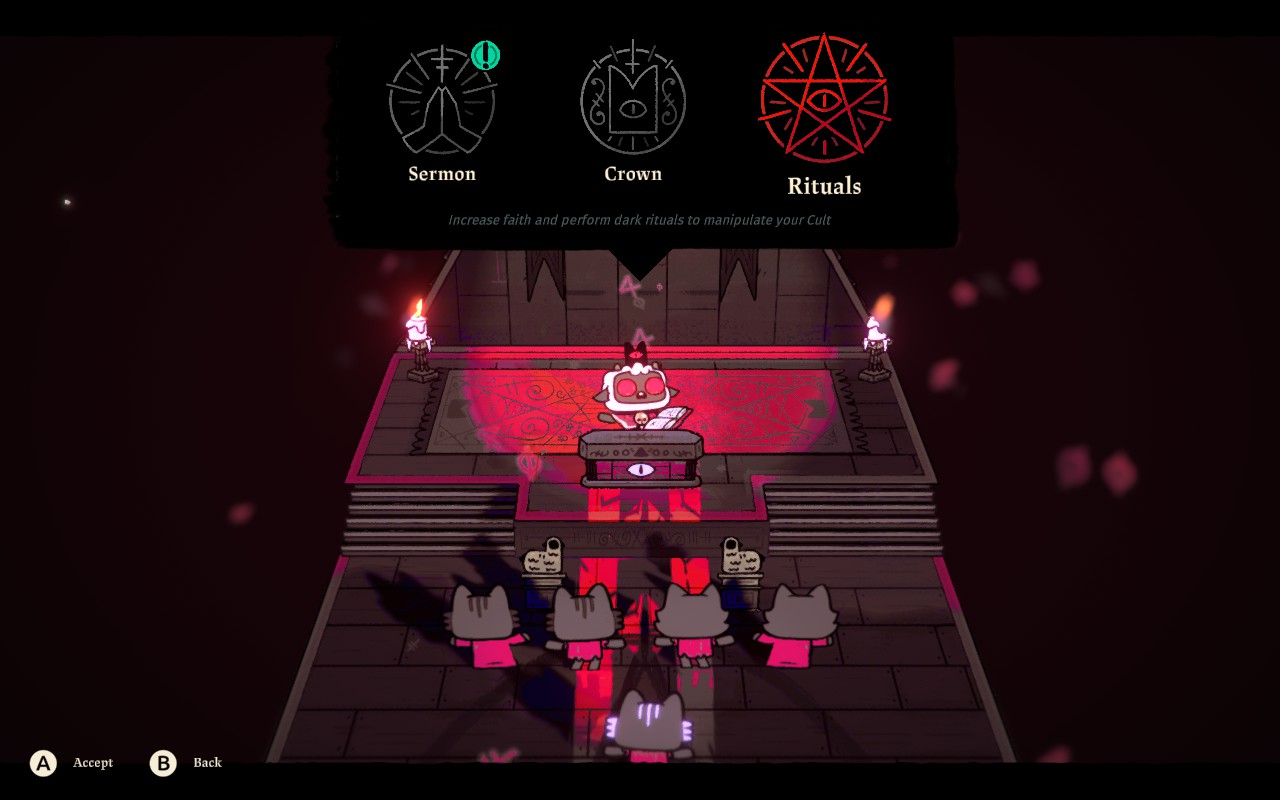 In Cult of the Lamb, there are just as many dangers facing the cult as there are facing the player. Through the management sim mechanics, you will have to fight off sickness, hunger, fatigue, and rebellion. Even if you are able to fight off the daily challenges, cult members age quickly and will eventually die. For the most part, you will be chopping down trees, mining rocks, and planting vegetables. These tasks can become automated as the cult grows. As the leader of the cult, your main function is to keep the faith level up, keep the food flowing and make sure everyone has a place to sleep.

The mechanics used to combat the hardships and growing pains within your cult go above and beyond what you would expect from an indie game. There are exactly 69 (nice) different structures you can build. Some of these function medicinally, agriculturally, or just to keep the place looking nice. There are close to 50 different improvements you can make to your cult including advanced farming and housing.

This is all in conjunction with the cult’s primary building, where you hold Sermons, 12 different Rituals, and implement 40 diverse Doctrines. Needless to say, Cult of the Lamb has a surprisingly deep sim management element that slowly becomes the games headlining act. Unfortunately, as you discover new structures and your space grows there is no way to move or remove items. Without a way to plan for items you do not know to exist yet, your base can become disorderly by the time you finish. 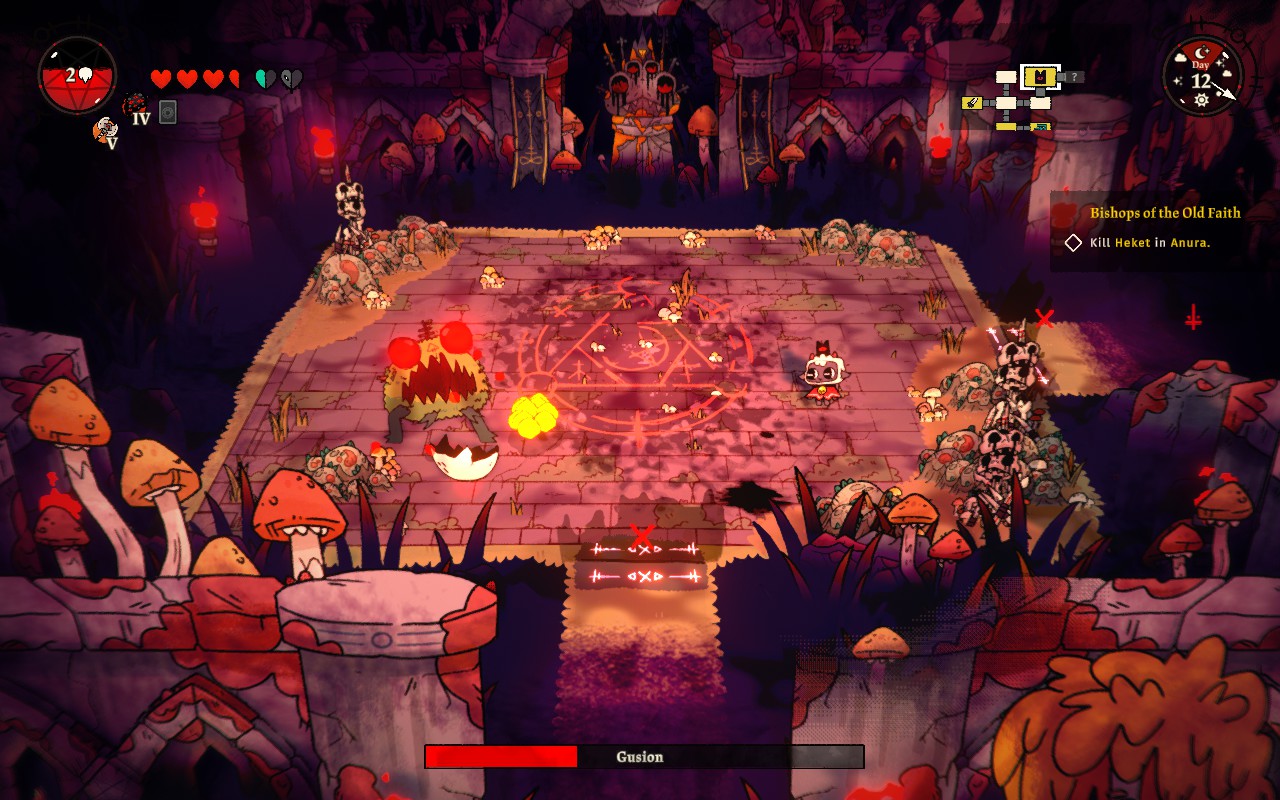 From a technical standpoint Cult of the Lamb is unobjectionable. While I did run into three small bugs, none of them were substantial. I am not overly worried about these hiccups as I am sure there will be patches. When playing, I switched between the Steam Deck and my PC. On the PC, I played in Ultrawide, in 4K with the highest visual settings enabled. The framerate stayed between 135 and 144 frames per second. It did dip down to around 90 FPS while building a new structure within my base, but that did not impact gameplay. As for the Steam Deck version, it’s not verified or optimized yet, it works.

A nice OLED display with a high refresh rate is a great way to play. Cult of the Lamb uses a mix of black and red that really stands out. A high-end OLED display is going to bring out the black in a complementary way. The demonic and Holloween themes give a unique tone that will please both fans of horror and Pumpkin Spice Lattes. This is the perfect game for the upcoming fall season.

The audio design is just as strong as the game’s performance, art, and combat. CotL has been scored by audio director River Boy. Their work on the game is fantastic. The dark melodic tunes blend well with the Cult building, combat, and demonic faith tone. The fellow townspeople have this cute muzzled noise when they talk, that is more Sims and less Banjo Kazooie.

Final Thoughts on Cult of the Lamb

In all, Cult of the Lamb is a fantastic game that perfectly blends two genres. While the combat is simple and there is room for improvement when it comes to level variation, this indie game punches way above its weight. The layers upon layers of mechanics make Cult of the Lamb a dense game with tremendous value at its indie price point.