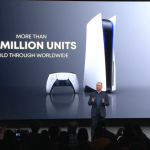 PlayStation had a strong 2022 in terms of both software releases as well as in hardware. With more PlayStation 5 consoles starting to appear on shelves in the latter half of 2022, combined with a killer line of software from its first-party teams. With God Of War Ragnarok, Horizon Forbidden West, and The Last Of Us Part 1 Remastered leading the charge. As well as a future slate of exclusive titles such as Final Fantasy XVI, Forspoken, and Marvel’s Spider-Man 2 heading into 2023. PlayStation has carried over its success from the PlayStation 4 generation very well. Tonight we got an update in how well Sony has done with the PlayStation 5.

Taking the stage during Sony’s presentation at CES 2023 Jim Ryan CEO and President of Sony Interactive Entertainment shared some milestones for the PlayStation 5. The console since its launch in 2020, has officially sold over 30 million units. This is an impressive feat, no doubt helped by the increased availability of the console. As both Xbox and PlayStation have seen stock levels start to increase thanks to supply constraints starting to ease heading into 2023. This 30 million number was no doubt helped by a record-setting month for the console in December. Ryan cited December as the best month for PlayStation 5 sales ever.

Also confirmed today: December was the biggest month ever for PS5 console sales, bringing the total to more than 30 million units sold worldwide.

Thanks for playing, everyone – 2023’s gonna be a great year!

It feels like it is impossible for PlayStation to slow down at this point unless something catastrophic happens. While PlayStation will still have a mountain of feedback from fans about what they want to see in terms of games, features, and more with the PlayStation 5. There is little doubt that Sony has once again caught lightning in a bottle with their console.

What do you think of PlayStation hitting this sales milestone? Let us know in the comments and don’t forget to check back for the latest gaming news and information.