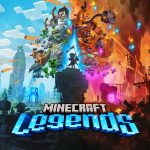 The Xbox and Bethesda Developer_Direct is live. Presenting news and extended gameplay from the latest titles directly from the developers from Bethesda, Mojang, and Turn 10 Studios. During the stream, players got an extended gameplay look at Minecraft Legends.

Minecraft Legends will feature survival elements, co-op gameplay, and a bunch of other great features.

“Minecraft Legends is a bold new direction for the series, taking all the blocks, mobs, diamond swords and more that you know from the survival classic, and transforming them into a fully-fledged action strategy game.”

Minecraft Legends will release on April 18, 2023. On Xbox Series X|S, Xbox One, and PC platforms. Pre-orders are open now.