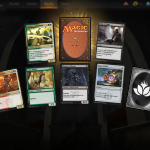 You are reading
Magic the Gathering: Arena

If you’ve been involved with tabletop gaming in the past two decades then surely you’ve heard of one of the top-grossing trading card games Magic The Gathering.

The game has traditionally been played much like Dungeons & Dragons; in that a bunch of friends all cram into a crowded gaming store or a basement with copious amounts of soda and good company to make a great game truly memorable.

With the current advent of online trading card games and the popularity that they’ve had it was only a matter of time that MTG’s publisher Wizards of the Coast would enter the marketplace of digital trading card games with a definite edition of Magic the Gathering. Magic The Gathering: Arena; Or MTG: Arena is currently in open beta and available to download for free. If you’ve ever thought about trying Magic The Gathering, this is a great place to start

Once you’ve started in MTG: Arena you’ll go through a short tutorial of about five games that introduce you the playing mechanics of a normal game in Magic, you will also unlock card packs and introduction decks to start playing the game.

The introduction decks follow themes around the alignment of the cards. In Magic there are five archetypes of cards to choose from, they each have advantages and disadvantages that drive how the player will construct their deck and play each game. Each color is diverse in its personality it represents and the lore surrounding it.

One of the ways that the game helps new players is by adding a visual representation of each of the phases you take during a turn and automating things when there are no available moves to make. You’ll find that the overall game flows much more natural and it only ever feels disjointed when you have an instant cast spell during your opponent’s turn. This is due to the game pausing and attempting to give you time to cast your card while your opponent is moving through turn phases. Overall, the pace of the games makes them fun and enjoyable to play one after another

Once you’ve started playing, the game will give you objectives and challenges to try to clear on your next games. These will typically follow playing a certain number of spell cards in-game or casting a number of creatures cards against an opponent. Once completed an objective will either reward you gold: used for purchasing new card packs, or card packs themselves. After clearing some objectives you can even earn a special reward; Usually a new deck of the current expansion.

Like the actual card game, you earn new cards by opening packs; Literal packs. These packs offer 8 cards in each and one of those cards is always a rare or mytic card type. There’s also a new card type called a “Wildcard”. These are specifically used to give you the option of replicating a card you already own

MTG: Arena is following the current edition of Magic the Gathering: Guilds Of Ravnica. Guilds of Ravnica offers many new styles of play to the game but it’s not the only edition available. You’ll also be able to get cards from Core 19, Dominaria, Rivals of Ixalan, and Ixalan. Each set offers specific play styles for each color and unique spell cards that follow the lore behind that edition.

Overall the game is fun and offers a quick entry into Magic and plays like a very true to life experience of the game. I’ve been playing MTG: Arena since the closed beta and I’ve been enjoying it along with building my very own collection of cards to play with friends and co-workers. One of the hardest things for me to get a grasp on with the physical TCG of Magic is what cards are really “valuable” in games. MTG: Arena offers a new and fast way to familiarize yourself with the modern expansions and the rules of how to play. If you’re interested in the game I highly recommend giving it a try and if the physical card game seems like more your style check out WOTC’s store locator at the new-to-magic webpage and inquire about the weekly events that are hosted there.