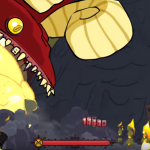 You are reading
Castle Crashers Teased For Nintendo Switch

It seems as if the legendary game by The Behemoth, Castle Crashers, will be making it’s way to the Nintendo Switch. Earlier today The Behemoth left a nice subtle tease by providing a picture of joy-con controllers in the colors of the main four knights of the game. With PAX East right around the corner, it won’t be surprising to see this announced at the convention.

The Behemoth has put out many classic indie games throughout the years including Alien Hominid and Battleblock Theatre. Most recently they released Pit People which was in the Xbox Preview program before release. With this announcement of Castle Crashes, it’s curious if we will see any other classics make their way to the Nintendo Switch anytime soon?