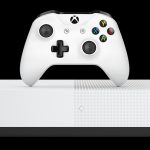 You are reading
New Diskless Xbox “Maverick” May Arrive In May

According to Windows Central and their sources, we may be getting a new Xbox One console very soon. The first time we have heard about diskless Xbox One codenames “Maverick” was late last year when Brad Sams of Thurrott.com reported on it. He claimed that the console would come with Xbox One S specs but be stripped of Blu Ray drive. Now we have Windows Central validating Brad’s claims with their own independent sources.

There are still few things we are missing here though, such as we don’t currently know the price. We can assume it’s going to be cheaper than Xbox One S but by what margin?  We also don’t know if Microsoft redesigned the console to make it smaller. It would only make sense as having the smaller console under the TV is always good for space saving and it should also allow for a further price reduction.

It is suggested that Microsoft also plans to release a Fortnite edition of this console. It is free to play an online based game, a perfect fit for all digital console. Additionally, it’s worth mentioning that any physical based games you may own could be swapped for a digital code if you choose to do that. This is something that Brad Sams discussed in his article last year.

With this console, Microsoft seems to be testing the waters. It seems like a great fit for those that consume game and media digitally. It could be used as a second console in the household, for kids for example. This console makes sense for gamers who subscribe to Xbox Game Pass which is digital service and may be used for xCloud in the future, essentially becoming a cheap streaming box

Facebook Twitter Google+ LinkedIn Pinterest Tumblr
Previous article Division 2: What to do After Level 30?
Next article The Overwatch League has found a way to include trash-talking.