You are reading
Shadowkeep Primer: The Eternal Vex

Destiny 2: Shadowkeep is fast approaching. With that in mind, this is the fourth in a weekly primer series exploring the state of each of the Destiny races and the mysteries still to be solved. So far we dug into the the Hive, the Cabal, and just last week, The Fallen. This series will run every Tuesday until the launch of Shadowkeep on October 1st, 2019. This week we turn our attention to the past, present, and future of the time traveling mind that is the Vex. 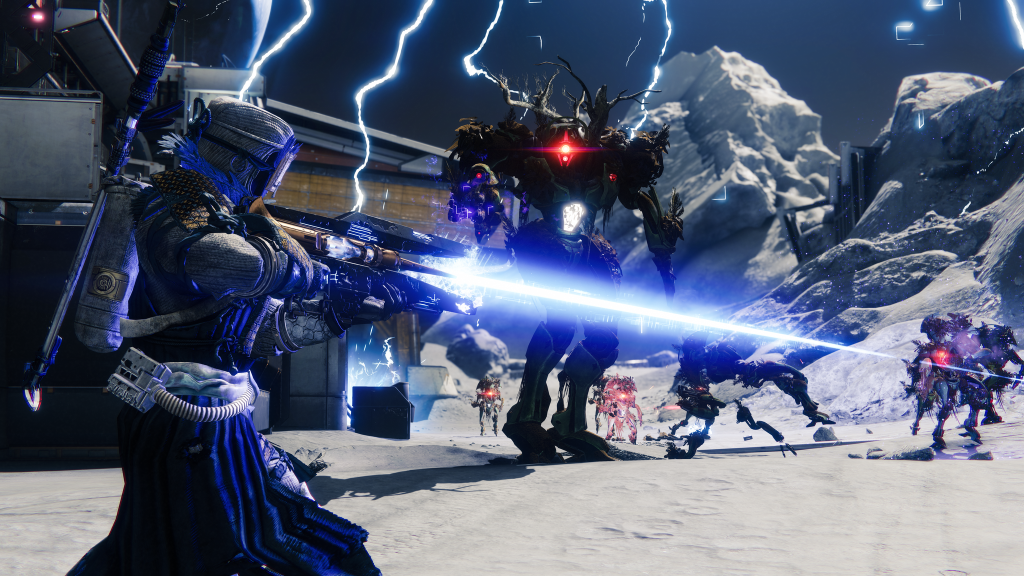 Time is a Flat Circle

The Vex are not what Guardians see on the other end of iron sights or a scope. They are not the morass of metal and wires. These are merely the vehicles by which the Vex flex their power through not just space, but time itself. The true Vex, is the milky, white fluid in the core. This radiolarian fluid, or Vex milk as it is affectionally known, is the physical manifestation of the hyperintelligent thought mesh that exists throughout reality. Where they came from is uncertain, it is even possible that they haven’t been invented yet. What is known is that the first encounter with the Vex was not by the Guardians, or even humanity. It was the Hive God Crota, who opened a gateway to parts unknown. On the other side, was the great power he sought, but it was not to be controlled, rather, it came to conquer.

The Vex invaded the Ascendant Realm of Crota’s father Oryx, and began the High War. Prior to their encounter with the Hive, the Vex were unfamiliar with the acausal powers of the Sword Logic or belief systems. They learned both through the creation of their ultimate weapon of war the Hydra, Quria, Blade Transform. Being machines, the Vex are able to run complex simulations to better understand, and influence the world. Quria attempted to simulate Oryx, who by this time was the immensely powerful Taken King. He failed, but was successful in simulating his previous form, Aurash. So fascinated was Oryx by this vision of his former self that instead of destroying Quria, he took the Hydra instead and gifted it to Savathûn. Despite being Taken, Quria was able to transmit all its knowledge to the Vex omni-mind which kept the Vex competitive in the centuries long war.

At some point, during the Golden Age, Vex structures were found first on Venus and then Mercury. During the Curse of Osiris expansion to Destiny 2, Guardians were able to travel to Mercury. There, they found it had been transformed into a Machine World to house the Infinite Forest. The Infinite Forest contains simulations of the entire universe. The Vex have been using it to simulate all the known species in the game as well as alter historic events, such as the outcome of the Red War. The Vex by their time traveling nature, have observed many futures.

During the events of the Taken War, the Guardians were allowed to see one such future. Praedyth, one of the original Guardians sent on the failed first raid into the legendary Vault of Glass, returned from the end of time with a grim vision. The Vex, like all other species would fall to the power of Oryx and the universe would be Taken. Desperate to avoid this, the Vex stayed any further incursions into the present day to allow the Guardians the ability to do what they couldn’t: deal with Oryx once and for all. With that vision now averted, the Vex have now refocused on the goals they have long had. Those goals begin, like the story of our Guardian, with the Black Garden. 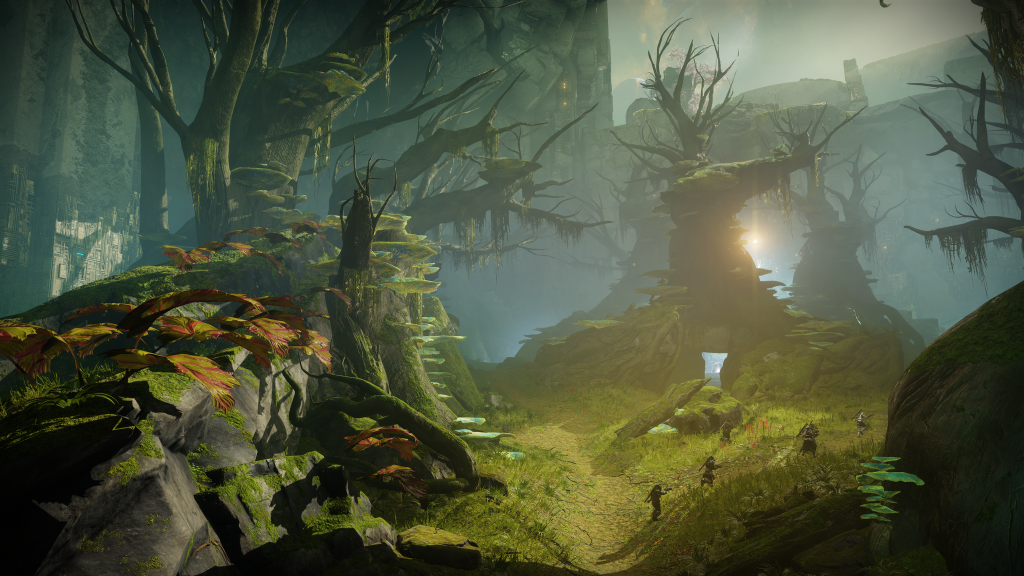 A Garden and A Guardian

The Black Garden is a mystery to Destiny fans, and it is a mystery that hopefully Destiny 2: Shadowkeep will shed some light on. The first raid, set to launch on October 5th takes place in the Black Garden after all. This is the same location as the final mission in the original Destiny. Though just because it has been part of the lore since the beginning, doesn’t make it any less enigmatic. The Black Garden exists somewhere beyond time and space. A realm Guardians are becoming more familiar with through the Reckoning and the Trials of Osiris (RIP). It is a living mindscape whose exact nature is impossible to know since by merely studying it, it changes and grows into something new.

While it is unknown how the Vex found the Garden, they are referred to as its gardeners and the Black Garden is protected by the Sol Divisive, a particular strain of Vex. At its heart is the appropriately named Black Heart. The Black Heart is a fragment of Darkness which Uldren Sov encountered during his foray into the Garden during the events of Destiny. He speculated that it was a monitoring device keeping an eye on the Traveler and its recovery. This bears out for when the Guardian destroys the Black Heart, the Traveler begins to heal. Since that time, the Taken and Vex both have attempted to revive the Heart, but were stymied by Guardians both times.

The End is the Beginning is the End

Their current goal is to conquer everything, though this hasn’t quite been working out for them. Therefore, expect them to head back to the Black Garden in an attempt to revitalize a key source of power from the past.

The gateways have opened.

Season of the Undying approaches.

The Vex have been warring on multiple fronts for a very long time. Yet, with all of time to draw from, their legions are endless. With the coming launch of Destiny 2: Shadowkeep, it looks like big answers are in store for the Vex. The roadmap for Season of the Undying shows something called the Vex Offensive beginning October 5th. It is highly likely that this will coincide with the world’s first raid completion. This is similar to how the Dreaming City Curse began after Riven was killed the first time. Given how lackluster the Curse of Osiris was received, I have high hopes for the Vex in the coming days. Now let’s take a look at some burning questions.

What’s the deal with Perfect Paradox?

Ah, Perfect Paradox. Perfect Paradox is a legendary shotgun with the unusual distinction that it wasn’t created. This is the shotgun used by the legendary Guardian Saint-14 who then gifted it to the Guardian after the Guardian gave it to him at some point in the future. Huh? The gun truly lives up to its name. The Guardian gets the gun from Saint-14 in the Curse of Osiris expansion, and at some point in the future, maybe in this upcoming expansion, the Guardian will give it to Saint-14. So who made it? Someone had to? Right? It’s enough to make your head spin. Speaking of Saint-14 though.

Will We Finally Meet Saint-14?

Saint-14 is a legend amongst Guardians, and rightly so as the first Titan Vanguard. The hero of the Battle of the Six Fronts, Saint-14 wielded the shotgun Perfect Paradox to deadly effect against the forces of the Fallen. He helped to establish the City and eventually established the Vanguard. At some point, he went to Mercury in an attempt to stop the rogue Warlock Osiris from disturbing the Vex, but was trapped in the Infinite Forest. While there, he killed so many Vex that they were forced to get inventive to defeat him. After centuries, the Vex were able to simulate a Mind that could drain Saint-14’s light. Though he killed it, he was left drained and was eventually killed. Don’t be surprised if Saint-14 shows up to aid the Guardian in the Black Garden during Destiny 2: Shadowkeep.

What is Osiris Up To?

Speak of the devil and he shall appear. After being teased for years, in Destiny, Osiris’ debut was somewhat underwhelming. Osiris had been deep in the Infinite Forest fighting against the machinations of a Vex called Panoptes, Infinite Mind. Panoptes almost succeeded in erasing the Guardian from history. After its defeat, Osiris has continued to plumb the depths of the Forest. Most recently, he was called in to assist with the three week curse time loop in the Dreaming City. Osiris was able to correctly deduce that only the Vex were capable of such temporal manipulation. However, due to inadequate information, he was unable to determine its cause. Its cause being the Taken Vex mind Quria, Blade Transform. With the heavy emphasis on the Vex in Shadowkeep, I would expect we see Osiris again, hopefully with more satisfying results.

That’s all for the Vex, join us next week as we dive into the Awoken! And check out our weekly Destiny podcast breaking down all the latest on Destiny 2: Shadowkeep, The Last Word with Lord Cognito and Ebontis every Friday, your go-to looter shooter podcast.