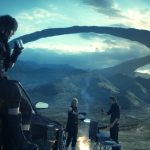 Final Fantasy XV used to be vaporware. It took so long to complete, that it even underwent a title change. Originally, Prince Noctis’ story to reclaim his throne from a warring country was called Final Fantasy XIII Versus. As the name suggests, this game would have taken place in Final Fantasy XIII’s universe. Yet, that never happened. Instead, the project rebooted in 2012, and Square renamed it in 2013. Eventually, we did get a decent game, Shigeru Miaymoto’s famous gaming development quote still stands, and honestly, a separate universe was arguably the better call. Yet obvious shortcomings prevail through FFXV that make the player wonder, “am I missing something?”

This game relies on its scale, and the major plot beats reflect it. Major story beats are major setpieces with massive beings and mass destruction. Part of Noctis’ journey to reclaiming his throne is earning the power of the gods. These gods tower over Noctis and his guards and wreak havoc when summoned. One god, Leviathan, resided by a heavily populated, Venetian-esque town. Noctis and his team had to coordinate with the local government to evacuate citizens while the summoning happened.

This scene is massive, and frankly, it looks like a final boss fight as well. When FFXV goes big for the spectacle, it swings for the fences. Leviathan is, literally, how big Final Fantasy XV can get, and these moments succeed at face value, but only at face value. So let’s go deeper, and deeper starts with the Summoner.

That is Lady Lunafreya, the Oracle, who can communicate with the gods, and is set to marry Noctis. If you watch the entire clip, you see that she dies in this clip after one final conversation with Noctis…or…well…the only conversation. Yes, Noctis and Luna message each other through a notebook that Umbra, the magic dog, carries between them, and yes, we see their childhood memories together, but this is the only time they’re together face-to-face in the present. Luna’s death is supposed to be a monumental moment in Final Fantasy XV’s story, but the punch lands with no weight. It is spectacle without substance. After all, how can we grieve a character we never truly met? This is emblematic of FFXV’s story: larger than life moments pair with poor development to make a flashy but shallow story.

Extra Content is a Terrible Way to Tell a Story

All of the plot development the story needed was pushed out to extra content for this universe. Before the game released, Square Enix released a prequel/interquel movie, Kingsglaive. This movie told the story of the fall of Insomnia, the capital city of Noctis’ home country. Kingsglaive happens during the opening hours of FFXV’s gameplay. After release, Final Fantasy XV got multiple DLC’s, each featuring a different supporting character. All of Noctis’ guards (and friends, for that matter), Gladiolus, Prompto, and Ignis, got their own additional content. Ardyn, the game’s main antagonist and final boss, even got new stuff. Each pack deepened these and other characters’ backstories and other events that happened off-screen in the main game.

This is too much. Kingsglaive covered the inciting incident of the story and the DLCs fleshed out characters more than the actual game. As much good as each piece of content did for its topic, the base game should not have to rely on all of this (especially since they never finished the DLC). The game should have enough depth on its own to support its biggest setpieces, let alone the full story. Forcing the non-flashy development out of the game takes away the needed support from the core story.

Big moments can sell games. Uncharted 2’s opening sequence in the hanging train cars is the cover art. The Last of Us‘ giraffe scene is the brightest light in one of the darkest games. Final Fantasy XV is full of these, but it’s missing the legs to hold them up. That train opening? It set up compelling questions about how Nathan Drake got there. Those seemingly random giraffes? They’re needed after Ellie’s traumatic episode in the winter. There’s more to building an impactful scene than the scale itself. With no legs, Final Fantasy XV only has eye-candy.