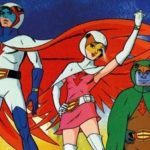 The Russo brothers have updated Anime fans on the upcoming live-action Battle of the Planets. During an interview with Collider, Jeff Russo talks about where his team is with the movie. This movie was first announced during the 2019 San Diego Comic-Con.

Battle of the Planets is an Anime from 1972, its called Science Ninja Team Gatchaman in Japan. The show featured 105 episodes, 85 of those were used in the North American adaption. Fans can watch the interview below. No dates or real information on when the movie will be made. Instead, fans were given a brief glimpse of how the team takes something like this movie and makes it their own. Currently, the movie is in the “Bible” stage. This is the point after all the time digesting of information from the original content by the creative team, this one is a one hundred perfect adaption of the series. The Russo Brothers have proven they can turn something we love into something amazing.

Watch the interview below that deals with the Battle of the Planets.

Expect some more news on this movie around the time of when the 2020 San Diego Comic-Con was supposed to happen. Hopefully, we will be getting some kind of digital event in its place.

Are you like me and completely PC less? Well, its time we join the rest of the PC world since Gears Tactics is out. Check out the Lords of Gaming review here. The Borderlands movie has some great casting news.