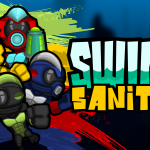 Decoy Games, the developers of underwater multiplayer title, Swimsanity!, made some big announcements during this year’s Guerrilla Collective stream.

In addition, Decoy Games announced that a playable demo of Swimsanity! is available now on Steam as part of the Guerrilla Collective Steam page and will be available to play throughout the Steam Game Festival – Summer Edition (June 16th – 22nd).

Swimsanity! is a multiplayer, underwater shooter with action-packed Co-Op and Versus game modes. You play as our hero Mooba, who uses a variety of unique power-ups and weapons to survive in this aquatic world. Whether you’re teaming up with friends to swim into Adventure mode, or clashing in competitive matches such as Last Mooba Standing, there are more than 150+ challenges to complete across 8 Game Modes in Swimsanity!. All modes can be played online or locally.

The game featured in the Nintendo Spring Nindies Direct and won “PC/Console Game of the Year” and the “Player’s Choice Award” at Playcrafting’s 3rd Annual Bit Awards. It was also one of 13 to be included as a third-party priority game for 2020 during Nintendo’s 2019 earning release.

The Lords of Gaming first got a chance to sit with developers Decoy Games back in PAX East 2019. You can find the full video interview here. A few months later, the talented and humble three-person team once again crossed paths with LOGNET. We got another chance to preview Swimsanity! and interview Decoy Games during the 2019 PLAY NYC event.