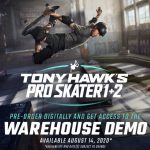 Nostalgia is a hell of a drug. However, when combined with well thought out and executed improvements. A game can find a whole new life again. We have seen this with the Resident Evil Remakes as well as the amazing Final Fantasy VII Remake. With all these games in the rearview now, it is easy to understand the hype behind the Tony Hawk’s Pro Skater 1 & 2 Remaster that will be coming later this year. We learned today that people will be able to try out the game ahead of its launch in September.

Today via the official Tony Hawk’s Pro Skater Twitter account, we learned that there will be a beta. The beta is for anyone who pre-orders the game on Xbox One, PlayStation 4, or PC. The demo will officially be available on August 20th, with more details to come at a later date. Simply titled “Warehouse Demo”, it appears that we will gain access to one of the most iconic levels. This will be very exciting for long time fans of the franchise. We will be keeping an eye out for more news related to the demo in the coming weeks.

Pre-Order Tony Hawk’s Pro Skater 1+2 digitally on all platforms and get access to the Warehouse Demo on August 14th, 2020. 🎮 Check out https://t.co/zJKWh76Smq pic.twitter.com/sCyzwKqqze

Are you excited for Tony Hawk’s Pro Skater? Let us know in the comments and don’t forget to check back for the latest gaming news and information.