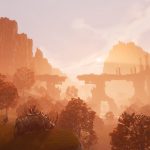 You are reading
Conan Exiles: Isle of Siptah Trailer

Funcom has finally revealed what they have been working on with Conan Exiles: Isle of Siptah. It has been quite some time since there was an update or expansion, so clearly they’ve been hard at work. The good news is, it’s something BIG!

Conan Exiles officially released on May 8th, 2018 on the PC, PS4 and Xbox One. Since then, the game has flourished with many free updates to bolster the quality of life as well as paid content to give a variety of cosmetics to craft. This has been great as new dungeons, world bosses and even ridable mounts have become available to the player base. The game even expanded its lands of the map to include new biomes over time, all of this at no charge. The only thing missing was a completely new map. Thus bringing Conan Exiles: Isle of Siptah.

If you have been following rumors, for quite some time it was suggested that a new map was in the works. Eventually, Funcom came forward to admit this was the case. Today, we got to view the fruits of their labor.

The new map, called the Isle of Siptah, looks to bring a new and different variety to the game itself. New mounts will make their way to the game with ridable rhinos, thralls that fall from the sky, and even a new god. While not much more is known about what will come in the Isle of Siptah expansion, Funcom plans to go more in detail tomorrow on Twitch.

Currently, the expansion is slated for a 2021 release, but will be available soon for PC in Early Access. It will be $19.99 with a price bump at full release.