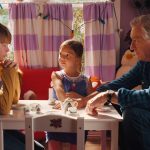 You are reading
The War with Grandpa Takes Down Tenet

This weekend a new movie took over the top spot. Hocus Pocus and Tenet did not have enough magic to make it past The War with Grandpa. Consequently, the comedy was able to gross a decent amount during these strange days.

The War with Grandpa grossed an estimated $3.6 million this weekend, which is more than enough to topple Tenet from its top spot. The latter has been there for weeks as it only grossed $2.1 million this weekend. Currently, Tenet is sitting at $323 million worldwide. This really shows that times have changed for large theaters. However, expect Tenet pick up again once it releases to home audiences.

Disney’s Halloween classic Hocus Pocus continues to print the company money. It grossed $1.1 million this weekend. That puts the movies re-release at $3 million worldwide. In addition, The New Mutants also had a decent weekend. The movie grossed $685,000 as its home release is nearly a month away. On November 17, viewers like me will finally be able to see this final FOX/Marvel movie. Unfortunately, it seems that more and more movies are being pushed back.

Next week, those who are going out to theaters will be able to see 2 Hearts and Honest Thief. They are the only two movies listed as being released in a wide number of theaters. Since it is time for some spooky fun we should be enjoying some new Ghostbusters: Afterlife. Sadly, this is one of the movies that was pushed back to March 2021.

Don’t forget to bookmark Lordsofgaming.net to get all of your gaming news.